“You may think of evolution as an upward process. Things evolve from primeval slime... up to single-cell organisms... up to... intelligent life. De-evolution, of course, works the opposite way. Back to simpler forms. For instance... even our musical friend, Toad... can become... a loyal child of the royal family. Goombas, ah!”
—President Koopa, Super Mario Bros. (film)

Goombas are a de-evolved form of Dinohattanites appearing in the 1993 Super Mario Bros. film. They are the film's equivalent of the Goombas from Super Mario Bros., but taking their own unique design where they are depicted as more lizard-like, with tiny saurian heads on a disproportionately large bodies, much taller than human characters. Depending on a Dinohattanite's ancestry, the Goomba's head type varies, showing either a rounded head, a snake-like head, or a velociraptor-like head. They always wear brown trench coats, the tops of which are shaped vaguely like their game counterparts' heads. They are depicted as being of lower intelligence, and communicating in mainly grunts, but are capable of utilizing weaponry. All Goombas present in the film respond to President Koopa's orders, with the exception of Toad. Goombas have an inclination and fondness towards music, a weakness Mario, Luigi and Toad exploit at two different instances in the film.

Mario and Luigi with the Goombas in the elevator.

A Goomba is introduced briefly when Mario and Luigi are running around Koopa Square confused of their whereabouts. They are properly introduced later on when Toad's character is arrested and sentenced to become a Goomba for singing Anti-Koopa songs; it is also implied that this was the fate of most within Dinohattan who committed crimes. President Koopa showcases his abilities to de-evolve Dinohattanites with his Devo Chamber machine to Mario and Luigi, when Toad is turned into a Goomba. Mario and Luigi, enraged after having witnessed Toad's fate, push Koopa into the machine and attempt to de-evolve him before escaping out of the Devo Chamber.

Throughout the film, Goombas appear as low-intelligence cronies responding to Koopa's commands. The kidnapped Brooklyn women, which includes Angelica, Daniella and Daisy, are held in a part of Koopa's Tower called "Goomba Barracks" for the majority of the film. It is implied that the Goombas in Koopa's Tower are permanent residents of the Goomba Barracks as shown when Mario and Luigi escape from said tower, they take one of the mattresses the Goombas sleep on to do so. Toad, in his Goomba form, appears in several scenes throughout the film but can be told apart from the other Goombas as he has a harmonica attached to the front of his suit.

Various Goombas were later outfitted with Devolution Guns in preparation of invading Earth. The Goombas, however, often had a weakness for dancing; Mario and Luigi discover this when they are hiding in an elevator that they occupy. Mario and Luigi begin rocking the Goombas back and forth to the elevator music playing to distract them. They begin to take a liking to dancing as evidenced by Toad later exploiting this to prevent the Goombas from following Koopa's order to shoot Mario after the dimensions become separated once again. After Koopa is successfully defeated, Goombas can be seen dancing in couples in Koopa Square. 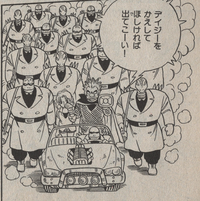 Koopa leading his Goomba army to find Mario, Luigi and the meteorite piece

The Super Mario Bros. film received a simplified manga adaptation titled Super Mario Makai Teikoku no Megami. Goombas reprise their role as being lackeys of Koopa, that he creates by zapping citizens using his Devolution Gun. They are first introduced when an enraged Koopa is informed by Spike and Iggy that they did not successfully bring him back the meteorite piece. He zaps the two, de-evolving them into Goombas.

Koopa proceeds to take to the streets of his kingdom, dragging Daisy along, and holding a megaphone on the other hand. He is lead by a Goomba driving a car, and a large crowd of Goombas following him, as he demands that Mario and Luigi turn over the meteorite piece over to him. After Koopa is hit with an Exploding Mushroom, he demands from his Goombas that they cleanse him off the fungus residue left behind by the blast. When the dimensions are briefly merged by the Goomba-fied Spike and Iggy, the Goombas begin de-evolving humans into chimpanzees.

SOCIETY HIT PARADE!
In this portion of The Times, we honor a citizen of Dinohatten, who has made a statement, left an impression, stood out above the rest, been different. These good people are not necessarily good. Some are, some aren't. You be the judge.