Not to be confused with Birdfish. 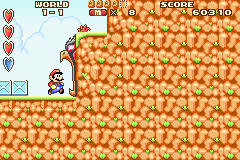 Mask Gates,[1][2][3] also known as masks[4] and Birdfaces,[5] are eagle-head gates that appear at the end of every level in Super Mario Bros. 2, its reissues in Super Mario All-Stars and Super Mario Advance, and its original version, Yume Kōjō: Doki Doki Panic. 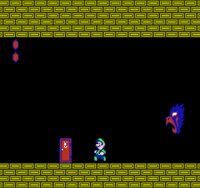 The battle against the Mask Gate of World 7-2

Mask Gates first appear in Yume Kōjō: Doki Doki Panic, where they resemble a tribal mask instead of a bird head. They are reminiscent to Phanto or the smaller masks that were replaced by Mushroom Blocks. Its design was altered to that of a bird's in its overseas localization, Super Mario Bros. 2.

In both games, Mask Gates are attached to the wall at the end of a level. A Mask Gate allows the player to move on to the next level, or to the world's boss if the current level is the last level of the world. To open a Mask Gate, the player must pick up a Crystal Ball, which is either placed out in the open or guarded by Birdo.

A Mask Gate in The Super Mario Bros. Super Show!

It has been requested that this section be rewritten and expanded to include more information.

A Mask Gate appears in volume 8 of Super Mario-kun. This Mask Gate is similar to the one near Wart's Castle because it starts attacking when Mario tries to enter through it. As in the games, Mario throws a Mushroom Block to have it allow him, Luigi, and Yoshi to enter Wart's Castle.