A Trouter is a red fish that jumps straight up out of water near waterfalls in Super Mario Bros. 2. Their name comes from "trout".

Trouters are found many times throughout the game as platforms in which to jump across a large body of water. Stopping time with the Stop Watch makes it much easier to cross them. Although not deadly from below, they are dangerous if touched from the sides. Not only this, but if Mario, Luigi, Toad, or Princess Toadstool ride the Trouter back to the watery depths, they lose a life. In the original versions, their fin, tail, and eyelids are black. In subsequent remakes, they are white with lavender shading.

Trouters made return in BS Super Mario USA, when they have the same role in the predecessor.

In the coloring book game, Super Mario Bros. & Friends: When I Grow Up, the coloring page for Marine Biologist has a Trouter swimming with other underwater enemies and Frog Mario. The description for the job is as follows:

Mario the marine biologist has just discovered some new life forms living at the bottom of the sea: Cheep-Cheeps, Jelectros, Bloobers, and Trouters, to name a few. 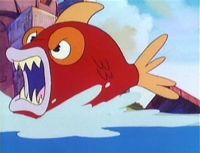 A Trouter from the The Super Mario Bros. Super Show! episode, "Mario and Joliet".

On The Super Mario Bros. Super Show!, Trouters make appearances in numerous episodes, where they are portrayed as being far more vicious than they are in Super Mario Bros. 2. Their eyelids are orange, instead of yellow, have a shark-like dorsal fin, and are shown to have purple lips with yellow teeth. Rather than merely hopping in and out of water, Trouters are shown to be fairly carnivorous with sharp teeth, and try to eat anyone who fall into their water. In this, they behave more like Cheep-Cheeps (especially the flying variant), and are likely a combination of the enemies. A running gag throughout the show was that Trouters are usually swimming in whatever body of water that Mario and his friends either have to cross or fall into, often appearing as an unwanted surprise and scaring the group. Sometimes, to show their appetite, Trouters are depicted by wearing bibs, and holding knives and forks.

Trouters are not shown to be minions of King Koopa, as they attempt to eat him if given the opportunity. However, it is not uncommon for King Koopa to use Trouters to his advantage, as he sometimes has them guard the waters surrounding his bases in certain episodes. In The Adventures of Super Mario Bros. 3, Boss Bass is given a similar role, and in the Super Mario World episode "Mama Luigi," a Blurp is also given a similar role and design.

In Nintendo Comics System, Trouters appears in the stories "The Fish That Should've Gotten Away" and "Beauty and the Beach." In the comics, the Trouters featured resemble and act like their cartoon counterparts, but are also depicted as capable of speaking. Stanley the Talking Fish seems to be a Trouter himself, as he is drawn the same other than fin color and expression.

In Ultimate NES Remix, Trouters appear in challenges based on Super Mario Bros. 2, acting the same as in their original appearance.

Trouter
Tribe: Aqua clan
Disposition: Fresh
Game appearances: USA
Step up, and jump.
Fish jumping vertically out of the waterfall. It jumps up with considerable speed, so one must be careful. It is also possible to use the Trouters that jumped up as a springboard.

Bio: 滝から垂直に飛び上がってくる。足場にして川を渡ることもできる。[4] (It jumps vertically up from the waterfall. It can be used as a foothold to cross rivers.)