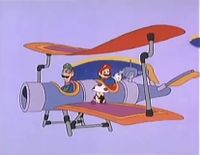 Mario, Luigi, and Toad flying in the flying carpet biplane

The flying carpet biplane[1] is a biplane constructed by Mario and Luigi in The Super Mario Bros. Super Show! episode "Mario and the Red Baron Koopa". The biplane is constructed out of two magic carpets, given to them for free by Sam Shalam after learning that they were trying to stop Lakitu and the Red Baron Koopa, and various other parts. The biplane features a fireball tail gun which shoots fireballs when pulled on and features a scope. The magic of the carpets allow Mario, Luigi, and Toad to fly upside down without falling out, let's the plane fly without an engine, and allows the plane to withstand strong weather. Luigi flies the biplane, Toad sits on the wings and acts as a bombardier, and Mario operates the fireball tail gun.

Mario and co. first use the flying carpet biplane to puncture a hole in Lakitu's cloud by flying straight through it. Shortly afterwards, Toad tosses a Bomb at the Wicked Weather Satellite finally ridding Pastaland of the terrible weather for good. The Red Baron Koopa soon retaliates, though, by shooting fireballs at the biplane using his own flying carpet with a fireball shooter. Luigi dodges the attack, however, and Mario shoots fireballs at the Red Baron Koopa in return, which overpower him and quickly burn his carpet. The flying carpet biplane is last seen behind Mario, Luigi, and Toad at the awards ceremony.