It has been requested that more images be uploaded for this article. Remove this notice only after the additional image(s) have been added. Specifics: Sprites from many games

Spiny Eggs, originally known as Spiny's eggs[1], are the projectiles thrown by Lakitus, and a form of the Spiny. Spiny Eggs are small, usually red balls covered in spikes. Once they touch the ground, they turn into normal Spinies. Despite its name, a Spiny Egg does not appear to be a typical egg at all; instead, it seems to simply be a Spiny rolled up into a ball. While in this state, they can be defeated when touched by invincible characters, burned by Fire Mario's fireballs, attacked by Raccoon Mario's or Tanooki Mario's Tail attack, etc.

Spiny's eggs debuted in the original Super Mario Bros.. In this game, they are more oval-shaped than they are in later appearances. Spiny's eggs demonstrate their basic behaviors in this game--they are thrown directly down from where Lakitu threw them, and on contact with land, turn into Spinies. In the manual, Spiny's eggs are listed separately from Spinies themselves. Lakitu will always throw either one or two Spiny's eggs at a time, depending on what form Mario/Luigi is in: if Mario is Small, he will only throw one egg, but if Mario is Super/Fire, then he will throw two eggs (this corresponds to how many hits Mario must take before losing a life).

Notably, code leftover in the game suggests that Spiny's eggs were meant to move horizontally in the direction Lakitu was flying when he threw them, as well as bounce off of walls. Whether this was deliberately cut or unavailable due to a glitch is unknown.[2]

Super Mario Bros. 3 included the return of the original red Spiny Egg, which is colored orange in the Super Mario All-Stars remake. In addition to the red Spiny Egg, a new green Spiny Egg was introduced, which slowly rolls along the ground chasing Mario and does not hatch. The Spiny Eggs in this game are spherical, as opposed to oval-shaped, which has continued to be their appearance even today.

In Super Mario World, Spiny Eggs are notably colored orange in all releases of the game, since Spinies in Super Mario World are also orange. In addition, along with normal Lakitus, they can also be thrown by Fishin' Lakitus and Lakitus found within pipes. Like Spinies themselves, Spiny Eggs can be safely Spin Jumped on.

Spiny Eggs are again thrown by Lakitus in Super Mario 64. Much like the game's Spinies, they have yellow spikes, as opposed to white spikes. On Tiny-Huge Island, they can be thrown into the water, where they will sink and eventually disappear. They reappear in Super Mario 64 DS, following the same rules, in with their current design. If Yoshi eats a Spiny and spits it out, it will bounce around as an egg.

In New Super Mario Bros., Spiny Eggs reappear, with a new property. If a normal Spiny touches water, it will tuck itself back into a Spiny Egg until it exits water. Spiny Eggs float on the surface of the water, and still damage Mario while in the water.

In addition to the standard Spiny eggs, Lakithunder is capable of throwing ricocheting Spiny Eggs that bounce around a few times before it loses momentum, at which point the Spiny Egg will hatch.

In Super Mario Galaxy 2, Yoshi can turn Spinies back into Spiny Eggs by licking them. Yoshi can then proceed to swallow Spiny Eggs and spit them back out, which can be used as projectiles to hurt enemies or break glass containers. King Lakitu throws them as well during his boss fight, which can be eaten and spat out by Yoshi . Spiny Eggs are also one of the few objects that did not previously appear in Super Mario Galaxy. 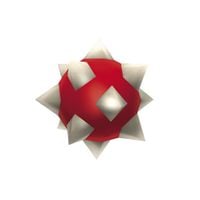 In New Super Mario Bros. 2, they reappear. If Mario touches a Gold Ring, Lakitu will throw coins, as opposed to Spiny Eggs.

Spiny Eggs once again reappear in New Super Mario Bros. U, where they function as usual. In addition to these, a Piranha Plant-based relative, the Piranha Pod, makes its debut.

In Super Mario Bros.: Peach-hime Kyūshutsu Dai Sakusen!, Spiny's eggs appear twice. The first time is a role as one of the enemies coming out of Mario's television when he is playing Family Computer at the beginning of the film. The second time is when a Lakitu throws several Spiny's eggs at Mario, Luigi, and Kibidango, but it missed. He uses rain and a mirror to make them grow into big-sized Spinies. 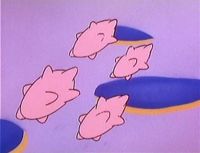 A green Spiny Egg from The Adventures of Super Mario Bros. 3

Spiny Eggs briefly appear in The Super Mario Bros. Super Show! episode "Mario and the Red Baron Koopa", where they are entirely pink, and act more or less like they do in Super Mario Bros.. Later on, a single, green Spiny Egg is thrown by a Lakitu in The Adventures of Super Mario Bros. 3 episode "Life's Ruff". This Spiny Egg makes a small explosion upon hitting the ground and turning into a normal Spiny.

Some Spiny Eggs, presumably transported to Dark Land by Wendy O. Koopa (who needs them for use in a potion), appear in Koopa Capers. While exploring a Fortress, Luigi finds a room filled with the eggs and some Ptooie, but he manages to evade them while wondering what they are doing in a dank fortress chamber, instead of being outside.

In Super Mario World 2: Yoshi's Island and its remake, Spiny Eggs (also referred to as "Needlenoses"[3]) are thrown by Lakitus, Wall Lakitus, and Aqua Lakitus. In these games, they do not hatch into Spinies, and instead explode. The point at which the various Lakitus are throwing Spiny eggs is displayed via a crosshair reticle, similar to Yoshi's Egg reticle.

In Tetris Attack, a Spiny Egg makes a cameo appearance in Lakitu's background, where he is throwing one down.

In Yoshi's Island DS, Spiny Eggs return, but only the Lakitus and Wall Lakitus return.

In Yoshi's New Island, Spiny Eggs return; however, like in Yoshi's Island DS, only the Lakitus and Wall Lakitus return.

In Yoshi's Crafted World, Spiny Eggs return, but only the Wall Lakitus return.

While not Spiny Eggs per se, Spikies, Spikesters, and Oerlikons take on similar-looking form in Super Mario RPG: Legend of the Seven Stars. The former two are thrown by Lakitus, the latter are knocked down from the ceiling by a Corkpedite.

In Paper Mario, Spinies, which appear in Flower Fields, could roll back into Spiny Eggs to attack. Lakitu also throw Spiny Eggs as an attack. Lakilester also uses Spiny Eggs in the attacks Spiny Flip and Spiny Surge, as well as in his fight against Mario under his nickname "Spike".

A Spiny Egg from Paper Mario: The Thousand-Year Door

In Paper Mario: The Thousand-Year Door, Spinies again attack by rolling into Spiny Eggs, and can now roll into eggs to make themselves invulnerable for a turn. They appear in the Glitz Pit. When Sky-Blue Spinies roll back into a Spiny Egg, they turn into "pipes," which are named as such due to mistranslation of the Japanese name, Paipo.

Spiny Eggs appear only when being thrown by Lakitu in Paper Mario: Sticker Star, and as such, only appear on the overworld. Lakitu will endlessly throw them, leading to an infinite supply of Spinies.

In Mario Party Advance, Spiny Eggs appeared as obstacles in the mini-game Dreadmill.

In Mario Party 7, Spiny Eggs appear in the Coinus Maximus event in Grand Canal. Here, Shy Guys throw both coins and Spiny Eggs to the player, which must be dodged to not lose any coins.

Spiny Eggs in the Mario Party 8 minigame Winner or Dinner

In Mario Party 8, they appear as hazards in the mini-games Water Ski Spree, Winner or Dinner and Grabbin' Gold. In each of the three minigames, they briefly stun the player(s) if they are touched.

Spiny Eggs reappear in Mario Party: Island Tour, Lakitu throws them in the minigame, Pachinko Wizard to eliminate players, some of them appear in the minigame, Deck Hunt, where they reduces the player's coin count upon contact.

In Super Smash Bros. Brawl, Spiny Eggs appear as they do in Super Mario Bros. as part of the Lakitu Assist Trophy.

In Mario & Luigi: Partners in Time, a Shroob-like version is dropped by Lakitufos and hatch into Spiny Shroopas, which also roll up into eggs to attack.

In Mario & Luigi: Bowser's Inside Story and its remake, large golden Spiny Eggs are thrown by Glam Lakitus and Lakitu Kings, though they do not hatch. Regular Spinies once again turn into eggs in the remake's Bowser Jr.'s Journey mode when using their Hit 'em Up Special Skill.

In Mario & Luigi: Dream Team, Lakitus and Lakitus R attack by throwing Spiny Eggs at Mario. During the battle with Bowser Jr., the Bros. can throw Spiny Eggs at him if they take his Junior Clown Car.

In Mario & Luigi: Paper Jam, both normal and paper versions of Spinies roll into Spiny Eggs to attack.

In Super Princess Peach, they appear again. They are based off of their appearance in Super Mario World 2: Yoshi's Island, except they do not display a cursor when targeting Princess Peach. Despite Spinies also appearing n thhe game, the eggs still explode instead of turning into them.

Bio: ジュゲムの投げるトゲのついた玉。着地するとトゲゾーになる。[6](A spiked ball that Lakitu throws. When it lands, it becomes a Spiny.)