Mr. Blizzards, also known as Spinning Snowmen,[1] are living snowmen in the Mario franchise, first appearing in Super Mario 64. They hop up and down and throw snowballs.

In Super Mario 64 and Super Mario 64 DS, Mr. Blizzards are found on Cool, Cool Mountain and in Snowman's Land. They hide in the snow until approached, at which point they pop out and throw snowballs at the player. Mr. Blizzards can be defeated by throwing a crate at them, or circling around them until they fall onto their sides and disappear. Two others, found on a bridge on Cool, Cool Mountain, simply jump back and forth across it and pay no mind to the player. If Mario loses his cap to the giant snowman and does not retrieve it before exiting the stage, a Mr. Blizzard will have it on the next visit (provided it is not recovered from a Toad).

In Super Mario 64 DS, Mr. Blizzards are also found in Chief Chilly Challenge. Wario can defeat them with a punch, and Yoshi can defeat them with an egg projectile and can also melt them with his fire breath while using a Power Flower. As with many of the enemies, their look is updated, though their attack pattern remains unchanged. They now have zigzag mouths, wear blue buckets for hats, and have solid yellow mittens instead of yellow ones with a single pink stripe. They are defeated by spinning, instead of falling on their sides and shrinking. Unlike in the original version, Mr. Blizzards do not respawn after Mario walks far away and returns to that spot.

Mr. Blizzards' first appearance in the Mario Party series was in Mario Party 3. In this game, they appear as a battle partner in duel boards. As a battle partner, Mr. Blizzard has three HP and one attack point. His special ability allows him to always hit the farthest target. Chilly Waters also features many Mr. Blizzards; most of them are purely for decoration, but a large one sits at the top of the board and throws snowballs when paid five coins or when someone lands on a Happening Space. Anyone who fails to jump over the snowballs will be forced to run from them.

In Mario Party 5, Mr. Blizzards appear as the Mr. Blizzard Capsule. When an opponent lands on the space with the Orb, a Mr. Blizzard falls on the player, causing them to lose all their Orbs. In the minigame Later Skater, a few Mr. Blizzards make appearances out of bounds.

Mr. Blizzard appears as a character in Mario Party Advance. According to his description, he is on the Snowtown Ice Stars team and regularly plays at the Ice Stadium. He is found practicing pitches at said stadium, and is annoyed if he's approached while practicing. Once he asks what the player is doing there, they ask him to pitch some snowballs at them, and Mr. Blizzard says that he will reward them with a Gaddget if they hit a home run. Once they do, he passes it off by saying that he was not trying, but still gives them the Mini Slugger. Afterwards, he gets back to his practice.

In Mario Party 7, Mr. Blizzards again return with the Mr. Blizzard Orb. In this game, their design is updated to the Super Mario 64 DS one.

In Mario Party 8, Mr. Blizzards appear in the minigame Alpine Assault. Their only purpose is to obstruct the player.

In Mario Party 9, only two Mr. Blizzards appear, larger than their past incarnations. They are in the minigame Snow Go, in which they attack the player by tossing snowballs at them. Getting hit by a snowball results in the player's being frozen. In the Museum, a constellation called Cold Guy based on the snowmen can be purchased.

In Mario Party: Island Tour, Mr. Blizzard is the third boss to be fought in the Bowser's Tower mode (being faced off against on the fifteenth floor). He hosts the minigame Mr. Blizzard's Snow Slalom, where the player rolls into him with snowballs. Meanwhile, Mr. Blizzard throws damaging snowballs at them. 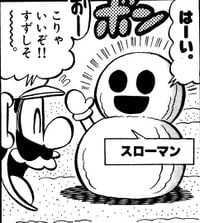 Mr. Blizzard in a desert from the Mario Party 3 adaption of Super Mario-kun

A Mr. Blizzard appears in the Mario Party 3 adaptation of Super Mario-kun.

In Mario Pinball Land, Mr. Blizzards appear in the Frosty Frontier Stage. They throw snowballs to push Mario away from them, and unlike many other enemies in the game, they cannot be defeated and only get stunned for a short period of time when Mario collides into them.

In Mario Golf: Super Rush, Mr. Blizzards appear in Golf Adventure as minions of the Snow King. In the frozen-over Bowser Highlands, they target nearby players and attempt to trip them up by throwing snowballs at them. They can be defeated by launching Bob-ombs at them. The Snow King can also summon Mr. Blizzards during the battle against him.