Wind is a mechanic that appears in some of the Mario games as an obstacle. While wind itself cannot hurt the player, it can blow them into an enemy or a pit.

In Super Mario Bros.: The Lost Levels, wind[1] appears for the first time as one of the game's new special features. It is represented by floating leaves. While it is dangerous at times, it is needed to clear a few gaps in some levels. Some of these gaps are so big that crossing them requires the player to use a combination of trampolines, wind, and bouncing off of one or more enemies. Wind is not present in the Super Mario Bros. Deluxe versions of the levels, requiring changes to some of them.

In some levels of Super Mario 64 and its DS remake, such as Cool, Cool Mountain; Tall, Tall Mountain; Tiny-Huge Island; and the DS-exclusive Chief Chilly Challenge, there are upward gusts of wind that can carry the player over a gap. Horizontal wind also appears in a few of these areas and a few more, such as Snowman's Land and Rainbow Ride, and can push the player into a gap or other obstacle instead. In addition, a cloud enemy called Fwoosh guards the entrance to the slide on Tall, Tall Mountain; it will attempt to blow the player away as they cross. These gusts of wind, as well as those of the Snowman's Land snowman, can also blow the character's cap away. A wind gust in Chief Chilly Challenge can only be passed by Metal Wario due to its strength.

Wind[3] reappears in New Super Mario Bros. Wii. It only appears in World 2-4, where it can blow coins around the level, and can be noticed by the sand that it carries along the way. Enemies in the level will turn against the wind when it comes and won't move until it goes away. It can also push the player right, though Mario can crouch to stand still. Like in Super Mario Bros.: The Lost Levels, it is needed to reach certain parts of the level, mainly one of the Star Coins.

In Super Mario Galaxy 2, wind is blown by windmills in Honeybloom Galaxy, Cloudy Court Galaxy, and Grandmaster Galaxy. The clouds created by Cloud Mario can be carried by the gust, thus reaching far away locations.

Wind appears in Super Mario 3D World, where it is blown by the Ty-foo enemies in the levels Ty-Foo Flurries and Gigantic Seasick Wreck. A small gust of wind is seen in the former level, being blown under an abyss that contains a Green Star.

Wind appears in Super Mario Odyssey. Some gusts of wind will send Mario high into the air. A hidden area found post-game in the Cascade Kingdom has wind that blows intermittently, which can push Mario off the ground. Mario can throw Cappy at this wind, which will blow Cappy in the direction the wind is facing, and is used to activate Lever Switches that would normally be unreachable. Ty-foos also reappear, and can be captured in order to blow away enemies and certain platforms.

In Super Mario Maker 2, wind blows in the desert theme at night, and functions mostly the same way it did in New Super Mario Bros. Wii, except that it can change its direction and frequency depending on the game style.

In Donkey Kong for the Game Boy, wind appears in stages 6-6, 8-10, 8-16, and 9-8, where they blow Mario left or right slightly based on the direction the clouds in the background are moving.

In Donkey Kong Country 2: Diddy's Kong Quest, wind[4] appears and features prominently in two courses: Gusty Glade, where it is used to jump over long holes or hinder the player by blowing them into unwanted directions, and Windy Well, where the wind blows upward and lifts the Kongs to high platforms. Wind also appears in the Squawks and Squitter portion of the level Animal Antics. In this game, the wind is represented by leaves, much like in Super Mario Bros.: The Lost Levels.

In Donkey Kong Jungle Beat and its Wii port, wind is blown out by Wind Mouths.

In Super Smash Bros., wind appears on the Dream Land stage. Here, a tree named Whispy Woods blows wind at fighters in an attempt to blow them off the stage. 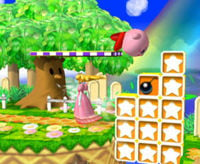 In Super Smash Bros. Brawl, wind appears on some levels in the Subspace Emissary, such as The Wilds, The Swamp, The Battleship Halberd Exterior and The Glacial Peak. It blows like normal wind to the side, but it also blows upward in the swamp. The stage Pokémon Stadium 2 will sometimes blow wind upwards, causing it to take longer to get down. The PictoChat stage also features drawn wind blown to the left. Since Green Greens returns from Super Smash Bros. Melee, so does the wind on the stage. The Borboras, enemies in the Subspace Emissary, also blow wind. Ridley can produce wind from his wings during his boss fight.

In the 3DS version of the game, wind occurs in the Paper Mario stage when the Fan appears, blowing fighters to the right, and wind can also occur in PictoChat 2. In the returning downloadable Dream Land stage for both games, Whispy Woods once again attempts to blow fighters off the stage.

In Super Smash Bros. Ultimate, certain spirit battles (e.g. Fox Luigi) have wind blowing either periodically or constantly. Some spirits can make a fighter partly or completely immune to wind.

Wind is a factor to consider when planning shots in Mario Golf games. Its speed and direction will influence where the ball will land.

Wind reappears in the Nintendo DS game Yoshi Touch & Go, where it can blow randomly in some areas, and can be produced by blowing into the microphone, or. It can cause all the created platforms to disappear. 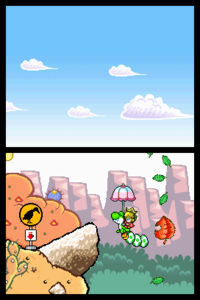 In Yoshi's Island DS, Baby Peach can use her parasol to catch wind currents that allow her and Yoshi to reach higher platforms.

In Super Princess Peach, wind serves as a hindrance which stops the player from using the Joy vibe to fly up to various areas of a level, as the player may be able to skip parts of a level or access secret areas with the ability.

Wind exists near the end of Chapter 3-3 of Super Paper Mario. The player can ride the red wind to the Warp Pipe at the end to finish the chapter.

In Paper Mario: Color Splash, when Mario and Huey go to Mustard Café after saving the purple Big Paint Star, they are both blown by a gust of wind into a giant hole that the Paint Star repainted.

Wind appears in Mario Kart 7 on several courses, such as Mario Circuit and Rock Rock Mountain. It is often blown out of pipes and can push the player around. It can also be used for the elevation of a glider, such as that blown by Koopa Clown Cars in Wuhu Loop and Neo Bowser City. The Screaming Pillars in DK Jungle blow wind that pushes the player back. Currents in courses such as Wario Shipyard function similarly to wind. 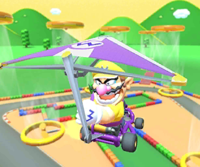 Wind reappears in the returning courses Rock Rock Mountain and Neo Bowser City in Mario Kart Tour, and is usually added to trick and reverse/trick variants of courses, such as DS DK Pass R/T. When driven over, it grants a Jump Boost. Wind also usually appears in Precision Gliding and Glider Challenges, and it is usually created by pipes and propellers. It is also created by the fans and bamboo in Ninja Hideaway. Propellers emitting wind can also appear up and down in this game, with downwards wind being used to cause the player to drop down.

In some courses or variants such as Vancouver Velocity 2R/T, wind is used in the Stanley Park section to allow the player to perform Jump Boosts.

Strong gusts of wind appear near the top of Mount Pajamaja and in Somnom Woods in Mario & Luigi: Dream Team, which push Mario and Luigi in its direction while they are using Spin Jump.