“It's the views that make Seaside Kingdom so special.”
—Bubblainian, Super Mario Odyssey

The Seaside Kingdom is a beach kingdom that appears in Super Mario Odyssey, being either the ninth or tenth kingdom visited, depending on whether the player chooses to go here or to the Snow Kingdom after leaving the Metro Kingdom. It is the greater location of Bubblaine, a cliffside beach resort area. Due to the local inhabitants being beret-clad snails, the boss having a French name, and two of the missions having a French title, the location may have been partially or fully inspired by France, most likely the Côte d'Azur, also known as the French Riviera. When Mario first arrives, Mollusque-Lanceur is sitting on top of the Glass Tower drinking all of the Sparkle Water, and the fountains are corked. To restore peace to the kingdom, Mario must uncork the fountains and defeat Mollusque-Lanceur.

It is daytime during Mollusque-Lanceur's attack on the kingdom. Once he is defeated, the time of day changes to dusk for the rest of the game.

Bubblaine was conceived as an elegant resort following the basic theme of golden champagne.[1] According to the concept art, a blue-colored Dorrie not wearing any hat nor goggles was supposed to be found swimming there. 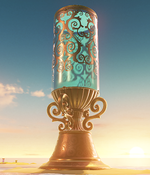 The Glass Tower shines in the setting sun.

It stands atop the Glass Palace, which has a uniquely beautiful architectural style. It's a treasure to be explored!

Behold, the power of carbonation!

The four fountains in Bubblaine spray seawater toward the Glass Tower. The ocean here is carbonated but otherwise unremarkable. However, when blended in the Glass Tower, it takes on a deep, elegant flavor and becomes Sparkle Water!

This treasured beverage is said to bring good fortune, happiness, and even romance to those who drink it, which has led to it being featured in many wedding ceremonies.

They look even bigger in person.

A Love Nest for Eels[edit]

In addition to the fun resort spots found in Bubblaine, there are some notable dangerous locations as well. One of these is the underwater cave connected to the lighthouse where gigantic creatures called Maw-Rays make their nests and shoot out their long bodies in response to stimuli. A little caution can go a long way when exploring this place. 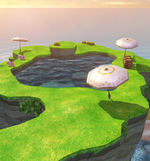 Deep enough for a full-body soak.

A ways away from the beach sits an outdoor bath fed by a natural hot spring. Featuring full ocean views, it has become quite popular with tourists. This spring was formed by volcanic activity on the ocean floor, and it's said to have numerous medicinal effects. Take one dip, and we're sure you'll fall for its charms. It's also a lovely natural reprieve from the modern resort developments.

The tan of a true beach-volleyball enthusiast.

When in Bubblaine, be sure to enjoy a game of beach volleyball on the local court. The on-site coach gives strong guidance, even for beginners. As they say around here, "Let's play!"

These unusual creatures collect seawater constantly. They use this water both to defend themselves and to propel themselves, sometimes straight up! 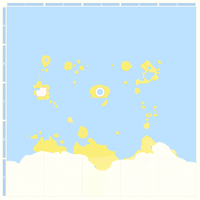 The Odyssey lands in the south central area of the kingdom. Hint Toad and Uncle amiibo are directly west of the landing site. After completion of the main story, a Nintendog can be found near the Odyssey and will help Mario find a hidden Power Moon.

The Beach House is on the southwest corner of the kingdom. The Checkpoint Flag is in front of it, near the Beach Volleyball court.

This Checkpoint Flag is on the roof of the lighthouse, where one of the four switches needed to restore the Sparkle Water is located. It can be reached by either going through the Underwater Tunnel to the Lighthouse or using a Gushen to hover there from where The Stone Pillar Seal Power Moon is.

Hot Spring Island is in the northeast corner of the kingdom. The Checkpoint Flag is on the northern edge of the spring. Prior to Mollusque-Lanceur's defeat the spring's surface is covered in lava, which can be removed by spraying it with a Gushen's water.

There is a Checkpoint Flag near the entrance to Rolling Canyon. Goombas wearing pirate hats can be found here.

At the end of Rolling Canyon past a wall of crates, Mario will find a Checkpoint Flag, a Power Moon, and a button used to uncork one of the four fountains.

This Checkpoint Flag is near the base of the Glass Tower. Rocket Flowers and a treasure chest containing a Life-Up Heart are found nearby. After activating the Moon Rock, a rabbit can be found hopping around the Glass Tower.

This underwater Checkpoint Flag is in the northwest corner of the kingdom near the entrance to the Underwater Tunnel to the Lighthouse.

This underwater Checkpoint Flag is in the northeast corner of the kingdom near Hot Spring Island.

The Diving Platform can be accessed via the Seaside Kingdom's secret painting. Where the painting is found depends on what order the kingdoms are visited.

On the Diving Platform, there is a treasure chest containing Power Moon #49, "Secret Path to Bubblaine!".

There are two paintings in this kingdom. One is located at the bottom of the Glass Tower's inside, next to a ring of coins and some air bubbles. It takes the player either to the Iron Cage at the Wooded Kingdom, the Island in the Sky at the Cascade Kingdom or the Viewing Balcony at the Lake Kingdom, and it can be accessed after defeating Mollusque-Lanceur.

The other painting is located on the Diving Platform, which can only be accessed from a painting at Bowser's Kingdom or the Mushroom Kingdom.

Main article: List of Power Moons in the Seaside Kingdom

In order to progress to the next kingdom, the player must collect at least 10 Power Moons.

Main article: List of regional coins in the Seaside Kingdom