Turnips are vegetables that first appeared in Yume Kōjō: Doki Doki Panic. They are frequently found in Subcon and are usually used for defense. 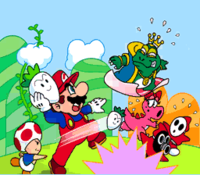 Mario and Toad throwing Turnips at Wart, Birdo and the 8 bits

Turnips make their first Mario game appearance in Super Mario Bros. 2. They are planted in the ground everywhere in Subcon, especially in grassy regions of the world. Turnips can be picked up and thrown at enemies to defeat them. The Dream Machine can also produce turnips which can be used as weapons for the player to damage Wart.

Turnips make an appearance in the direct sequel, BS Super Mario USA, and are used for the same purpose as in the previous game. Giant turnips are thrown by Princess Peach from off-screen during certain intervals of the voice drama. It can take out any enemy except for the end bosses of each world and Wart but can also do damage to the player. Giant black turnips with angry faces are also thrown from off-screen but by the bad guys.

Giant turnips, called Giant Vegetables[1] or Huge Vegetables,[2] appear in Super Mario Advance. They take longer to pull out and work just like their normal-sized counterparts, but can hit more enemies, due to their bigger size.

Using e-Cards, ripe and unripe turnips can be brought into the main game in Super Mario Advance 4: Super Mario Bros. 3 via the Blue Green Switch, whose e-Card simply refers to them as "vegetables." They are also found in several World-e levels, namely Vegetable Volley, The ol' Switcheroo, A Sky-High Adventure, Ice Cubed, Ground Work and Treacherous Halls. The game also features pickable giant turnips, from Super Mario Advance. They can be used in the same manner, though Frog Mario cannot grab turnips.

After a 14-year absence from the Super Mario series, turnips reappear in Super Mario Odyssey, where they are objects that can be plucked from the ground and thrown to attack enemies. Three golden turnips also exist, and they give Power Moons when thrown into the stew at Peronza Plaza.

In the boss battle with Wiggler in Mario & Luigi: Bowser's Inside Story and its remake, the Wiggler may water the ground and some sprouts will grow. Two of the three possible objects he pulls out are ripe and unripe turnips.

In Mario & Luigi: Superstar Saga + Bowser's Minions, Shy Guys attack enemies by throwing turnips in the Minion Quest: The Search for Bowser mode. During their Special Skill, Throw the Fight, they throw a larger turnip at a targeted enemy. 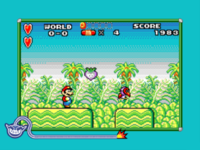 Mario throwing a vegetable at a Tweeter

A turnip makes a minor cameo in WarioWare: D.I.Y. Showcase in the microgame Mario Adv., where Mario uses one to defeat an enemy.

Planted turnips appear in the Shy Guy Bazaar course in Mario Kart 7 and Mario Kart Tour. In the Mario Kart 8 Deluxe Booster Course Pass, the Turnip Cup is represented by a turnip emblem.

Turnips make their true 3D debut in Captain Toad: Treasure Tracker and reappear in its Nintendo Switch and Nintendo 3DS ports. They can be plucked from Pluck Patches by Captain Toad or Toadette and thrown to attack enemies. They award one coin when they hit a surface or an enemy. Turnips can also be used to unlock or discover new pathways by throwing them at obstacles such as POW blocks. In the minecart levels of the game, Captain Toad rides a minecart full of turnips that can be thrown in many angles at his surrounding environment. Some levels also contain turnip-shooting cannons, starting with Turnip Cannon Jungle. Additionally, Captain Toad can throw turnips at Super Gems to obtain them without having to grab them himself.

Giant turnips also return from Super Mario Advance during the boss battle against Wingo. At the end of the battle, the final giant turnip thrown at Wingo by Captain Toad causes the bird boss to accidentally swallow the massive vegetable and become too bloated to fly, resulting in Captain Toad's victory.

In the Super Mario Mash-up in Minecraft, potatoes are replaced by turnips.

Mario and the yellow Rescue Squad pulling the Turnip out

A turnip returns in Paper Mario: Color Splash as a Thing. It appears in the entrance of the Sacred Forest, blocking the Warp Pipe to the rest of the course. All eleven members of the yellow Rescue Squad must be found in order to pull it free. When it is used in battle, it will become sliced and the slices will shred the enemies (and the screen), like the Scissors Thing in Paper Mario Sticker Star.

In Paper Mario: The Origami King, turnips are mentioned in Musée Champignon's description for the Black Shy Guy, which states that it likes to throw turnip-like objects.

In Yoshi's Crafted World, a large turnip appears as a craft in Monty-Mole-B-Gone. It is one of the six souvenir hunt requests from the Origami Gardens Blockafeller.

Turnips make an appearance in Mario Golf: Super Rush in Toadette's special dash, Turnip-Toss Dash, in which she throws three of them.