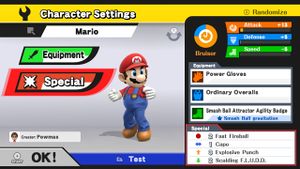 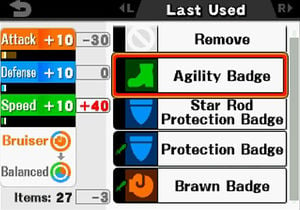 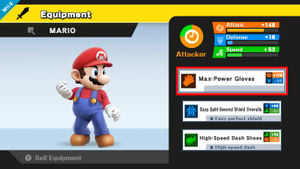 Prerelease image of the Wii U version.
Since this picture was taken before the game is released, the icon displaying "overalls" corresponds to the coat icon, a minor error. Names are also inconsistent with the final release (compare "Easy Split-Second" to "Perfect Shield Helper" and "High-Speed Dash" to "Sprinter"). Equipment labels are also different. Compare "Attacker" to "Bruiser".

Equipment is a major aspect of Super Smash Bros. for Nintendo 3DS / Wii U. Players initially have three pieces of equipment: one Brawn Badge, one Protection Badge, and one Agility Badge, but they can earn more equipment through a variety of ways, including unlocking them via Classic Mode, Smash Run, Trophy Rush, Street Smash, Target Blast, Challenges, and amiibo prizes. Equipment raises one or more stats (while lowering others), but they can provide additional effects, positive or negative (equipment with negative effects, however, are generally more powerful, and have a smaller stat penalty). Players can sell equipment for a small amount of gold; more valuable and powerful equipment generally cost more gold.

Equipment comes in three categories, which are Attack, Defense, and Speed.

Any stat that has a majority trait has a label attached to it. If there are two stats that are roughly equal, the label shows both traits; for an example, a character with mostly attack and speed have the "Spd/Atk" label.

Every stat-boosting equipment has a drawback, depending on the type of equipment. The bigger boost the equipment offers, the bigger the penalty. What stats an equipment offers is variable, and some equipment have better stats overall (such as both higher stat gain and lower stat penalty for two equipment of a kind) and are worth more when players sell them.

Each character can wear only three pieces of equipment, and equipment stats can be stacked. However, stat values are not able to go higher than 200, regardless of if the value is positive or negative.

Once the player has finished giving equipment and setting different special moves, if there are any, the player can save the combination of equipment under a name, including the character's color (which can be altered if players are selecting their character under the character select screen under the Custom menu). There are ten available slots, so players can save a total of ten combinations for one character.

Equipment can be turned on or off, although characters cannot use equipment in All-Star mode, the Stadium modes, Trophy Rush (3DS only), or With Anyone during online play. Likewise, certain events in the Events game mode prevent the player from using equipment as well. Also, whenever fighters use their Final Smashes, their equipment will temporarily be disabled, but the opposing fighters' defense values can still affect how much damage the Final Smash will deal whenever it hits.

On one final note, the player can only hold up to 3,000 pieces of equipment. The limit, however, can end up decreasing if the player has any copied fighters who have equipment equipped onto them. If the limit is reached, the oldest equipment gets removed to make room for new equipment.

Dr. Mario has a unique trait, where he has passive equipment statistics implemented onto his attributes. He'll act as if he's equipped with a +15 Attack value, and a -50 Speed value, resulting in his attacks dealing 1.12x their normal damage, his ground mobility being 0.832x their normal values, and his air mobility and jump height being 0.808x their normal values. This modification occurs before any actual equipment is applied, and the player can't fully reset the Attack and Speed values back to 0.

Below is a list of all the equipment types that exist in the game. The equipment names are from the American English version of the game, but if there are name differences between the American and British versions, then the British name will be displayed below the American name.

How often the player can acquire a specific equipment type is determined by how many fighters are able to use it.

Some equipment carry special attributes, which can either be positive or negative. Unlike with the equipment that doesn't have bonus effects, bonus effect equipment do not have a rarity level.

Equipment that offers positive effects usually have stronger stat drops than stat boosts. How massive the stat drop is when compared to the stat boost can depend on the strength of the bonus effect; for example, the Critical Hitter equipment always hinders a stat more than what it boosts, while the Hard Braker equipment may still offer a stronger stat boost than a stat drop.

Also, some equipment can give one item at the start of the match; if the item is turned off, via item switch, the item does not appear. The item will never appear if the player is playing an event match, however, since event matches do not allow outside items to be used.

On a side note, some bonus effects will never activate when the player is fighting against Master Hand, Crazy Hand, Master Core, or any Smash Run enemies. Also, not all bonus effects can be stacked.

Note: Some bonus effects are named differently between localizations. The British names are displayed below the American names.

Equipment that the players can receive are often given random stats. The following rules are governed for how the equipment is generated:

Note: Equipment that's unlocked by completing challenges do not follow the calculations that are mentioned above; their stats are always fixed.

An amiibo can be customized with equipment as well. Unlike with playable fighters, amiibo fighters can be equipped with any kind of equipment, regardless of whether or not the original fighter is compatible with the equipment. However, the amiibo will consume any equipment that it receives, causing the equipment to be lost permanently.

When fed equipment, the stat boosts and drops that the amiibo receives are smaller than what the normal fighters are given, but to compensate for this drawback, an amiibo can be given more than three pieces of equipment, enabling its stats to gradually increase. However, like with the normal fighters, amiibo fighters can only learn up to three bonus effects. If it has three bonus effects and consumes another equipment with a bonus effect, it must choose which effect to remove, including the incoming bonus effect; if the incoming bonus effect is removed, however, the stat increases and decreases are altered. Also, there is a limit to how much equipment an amiibo can be fed in one session; if the amiibo is full, it has to fight in a match before it can consume more equipment.

The player can also sell equipment to earn gold. How much gold that is earned is determined by the equipment's stat values, along with how strong its bonus effect is (if it has one).

The following table displays the selling price range for the equipment that does not have any bonus effects.

The selling price formula is as follows:

After players have sold any equipment, in order to keep the gold that they gained, they have to also save any changes that are made to their customized character. If the character customization is not saved, the game will act as if the player has sold nothing.

The first Challenge Panel contains no unlockable equipment; if players meet the conditions listed, they must first uncover enough challenges to reveal the next panel, and once the next panel is revealed, the items are automatically unlocked. Below are the requirements and rewards in the Nintendo 3DS version of the game.