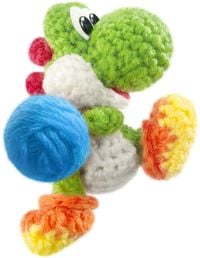 The Egg Throw is a move used by Yoshis and Sunnycide. This is Yoshis' signature move and was first used in Super Mario World 2: Yoshi's Island. To use it, a Yoshi must first get a Yoshi Egg. Each throw uses one Yoshi Egg. The player must hold or press the aiming button to show an X-shaped cursor. The egg keeps going in the direction it is thrown until it hits a wall, a ceiling, or the ground, at which time it bounces. When it hits an enemy or bounces too many times, the egg breaks. Bouncing eggs are especially useful in underground stages. If an egg bounces multiple times, it changes color, going from green to yellow to red, after which it breaks. Most bosses in the Yoshi franchise are defeated with this move.

In Super Mario 64 DS, Yoshi does not have to aim, because an egg he throws automatically targets the nearest enemy. If no enemies are around, the egg is thrown directly forward. It can also chain to a couple of enemies. If it does this, not only does Yoshi clear the path more, but he also gets two coins per enemy, rather than just one. The move is useful in the mission Behind Chain-Chomp's Gate because it can paralyze the Chain-Chomp for a few seconds. However, Yoshi can carry only one egg at a time, instead of six in the Yoshi series.

In Mario & Luigi: Partners in Time, this move is used for the first time by a character that is not a Yoshi, in this case, Sunnycide. This boss character can use Egg Throw against all four of the Mario Bros. as an attack in its boss battle with Yoob eggs that contain trapped Yoshis inside. This attack can be jumped over.

In the Super Smash Bros. series, Egg Throw is Yoshi's up special move. When it is used, Yoshi throws an egg at an upward arc rather than directly forward; the angle of the throw can be adjusted by tilting the Control Stick after executing the move, and the distance depends on how long the player holds down the special move button. Starting with Super Smash Bros. Brawl, Yoshi is also given some height when using the move in the air, but it decreases each time he uses it. The eggs break as soon as they hit an opponent or object; in Super Smash Bros. Ultimate, however, the eggs can bounce off the ground at least once before breaking.[1]

In Super Smash Bros. for Nintendo 3DS and Super Smash Bros. for Wii U, this move has two custom variants: High Jump and Timed Egg Throw. High Jump gives Yoshi an extra jump but does not throw an egg, and the move can still be used more than once, but each jump gives less height, while Timed Egg Throw throws an egg that goes through enemies and explodes after a set amount of time.