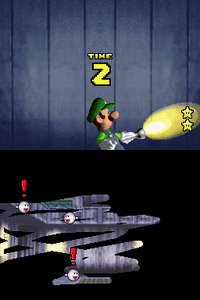 The minigame's music is an arrangement of the Super Mario Bros. Underground Theme, like in Coincentration and Intense Coincentration.

Luigi must use his flashlight to find the Boos in the mansion. The player must use the

stylus as a flashlight. In the intro, the player sees the Boos, which follow basic physics, bouncing off walls and each other at angles relevant to the angle at which they hit them. By observing the Boos at the beginning, the player can predict where they end up. The lights then turn off, and the player then must find the Boos in the dark in three seconds by rubbing the Touch Screen with the stylus. If the player finds all of the Boos, the next level starts, where more Boos are found. After level fifteen, the amount of time gets reduced by one second. If the player cannot find all of the Boos in a certain amount of time, they lose the minigame and get a Game Over.