“You there with the mustache! I am the king of cold, Chief Chilly. I lock up anyone who challenges the superiority of my 'stache.”
—Chief Chilly, Super Mario 64 DS

Chief Chilly is a boss who appears in Super Mario 64 DS and Mario Kart DS. Resembling a larger version of the Chill Bully, he is much larger than an average Bully and has a spiked mustache and a crown of ice crystals. 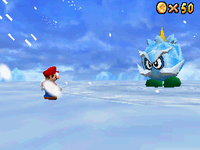 Before the events of Super Mario 64 DS, Chief Chilly locked Wario up and was told by Bowser to guard the key to Wario's door. Chief Chilly is found at the end of the stage Chief Chilly Challenge, which only Luigi can access using a Power Flower in the room with the large mirror. Once the player enters Chief Chilly's arena, he states that he locked Wario up because he was rude and mocking his mustache. 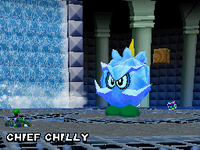 In Mario Kart DS, Luigi must battle Chief Chilly on Level 6 of Mission Mode. Like in the battle with the Big Bully, Luigi must push Chief Chilly off his platform into the water. However, Chief Chilly must be pushed off three times instead of one time and becomes stronger and trickier with every successful attack on Luigi's part. However, after he falls into the water for the second time, he gains the ability to jump over Luigi's boost attacks. To defeat him, Luigi has to approach Chief Chilly, then attack him either from the side, where the boss is unable to see him, or while the boss is charging at him, which knocks both of them backward. Luigi can attack him either from afar or in close proximity to him.