Not to be confused with Cheep Cheep Reach.

Cheep Cheep Beach is the third course of the Mushroom Cup in Mario Kart DS. It is a tropical beach named after Cheep Cheeps, similar to Cheep-Cheep Island from Mario Kart: Super Circuit.

The course reappears in Mario Kart 8 and Mario Kart 8 Deluxe as the third race of the Shell Cup. A remix of this course's music is featured as a selectable music track that can be played in events in Mario & Sonic at the Rio 2016 Olympic Games. 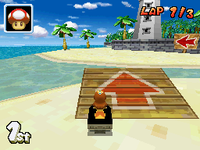 Daisy drives toward a small ramp just before the lighthouse.

The racing line is on the sand, and a wooden boardwalk is straight ahead. The boardwalk has wooden ropes on both sides, which prevent racers from falling off. While on the boardwalk, racers must turn right, as a sign indicates, and then drive over a large Dash Panel ramp to land onto a wide sand area below. From hereon, the sand path is surrounded by a large body of water on both sides. When racers land onto the sand, they must take a circular turn and drive under two large arched rock structures (resembling the large, pink one from Peach Beach in Mario Kart: Double Dash!!). After this is a Dash Panel ramp in the center of the course. Racers can optionally drive onto it for a speed boost.

After the ramp, racers must continue on the swerving sand path ahead. They must avoid driving into coconut trees and crabs along the way. They must also avoid driving into a few Cheep Cheeps which bounce in the shallow water. Racers must avoid driving into the deep water, which is out of bounds. After turning left then right, racers must follow a straight path ahead. There are two small ramps ahead, each having a red arrow pointed upward. Racers can optionally use these ramps to move over the shallow water. A white lighthouse is shown in the background, standing on a gray wall. From there, racers must take a left turn and continue straight past two Cheep Cheeps and three palm trees at the left shoreline. The gray wall continues up to the start of a twisted jungle, which is pointed out by a wooden post with a large, red arrow pointing right. A few Item Boxes indicate the jungle's threshold.

The course was originally named Cheep Cheep Shore in earlier versions of the game. Parts of the course featured grass on each side of the sand.

There are two missions that take place on Cheep Cheep Beach:

Panorama of the track in Mario Kart 8

Cheep Cheep Beach reappears as the third race of the Shell Cup in Mario Kart 8 and Mario Kart 8 Deluxe. It received design changes. Like Cheep Cheep Lagoon from Mario Kart 7, the course received a banner with its course name in it, while the starting banner has been redesigned to resemble a volleyball net and now has the modern Mario Kart logo. The course, like the other retro courses, has received an HD upgrade in visuals, and has a live-recorded cover version of its theme. The water tide no longer changes. Due to that, Cheep Cheeps now swim in the water instead of hopping on the course. Drivers can also drive underwater in the sea. Furthermore, a few of them now occasionally jump over where the racers glide from the boardwalk and where racers jump off the ramp, serving as obstacles. Piantas are now seen at the starting line. The start of the course where the boardwalk merges into the sand has had the Dash Panel replaced with a Glide Ramp, and the course has high tide. Underneath the sea, coral reefs are now present. The last turn before the start and finish line now has a mud on the corner, which a racer can use an item such as a Mushroom to cut through the mud. On the last stretch of the dirt section before the finish line, two ramps have been added for racers to perform a trick.

Cheep Cheep Beach stickers appear on the sides of the trucks in N64 Toad's Turnpike. Also, the lighthouse from this course can be seen from N64 Rainbow Road.

When we arranged this, we put a lot of emphasis on reproducing the original track. I'm particularly fond of the pedal steel guitar that appears partway through the track.