This article is about the recurring obstacle. For the enemy also referred to as a "plant-pendulum", see Piranha Pest § Mario & Luigi: Partners in Time. 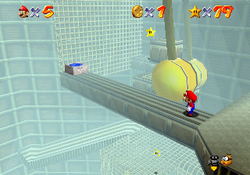 In The Pit and the Pendulums, Mario must carefully cross a couple of pendulums twice to acquire the Power Star it activates.

In Super Mario 64 and its remake, pendulums appear throughout Tick Tock Clock as part of the level's clock-based aesthetic. A small pendulum swings within the grandfather clock this level takes place in, likely the one encountered at the very bottom of the level. Certain other pendulums appear higher in the stage, often over pits, requiring Mario to time his jumps when encountered.

In The Pit and the Pendulums, two pendulums provide a decent challenge for Mario halfway up the clock, requiring him to cross past them and back without getting pushed off, which results in him dropping a good distance.

Notably, the pace at which the pendulums swing is dependent on the time the clock displays when Mario jumps through it. Depending on this, the pendulums may swing at a quick pace, or they may not swing at all. If this is the case, the pendulums are frozen in place, proving much less of a threat.

In Donkey Kong Jungle Beat, a group of pendulums swinging in unison appears as platforms near the top of the Clock Tower.

In Mario Kart DS, a single larger pendulum appears as a hazard on Tick-Tock Clock before the gears section, swinging at a slower rate. If a racer collides with it, they are knocked.

In Mario Kart 8 and its Nintendo Switch port, an extra pendulum was added after the clock face, both displaying the Lightning Cup emblem on both sides. They now swing right in front of ramps the racers are required to cross. Unlike in Mario Kart DS, colliding with the pendulums just slows down the racers, who usually drop down in front of the ramp.