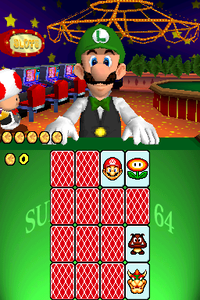 Memory Master is one of Luigi's minigames found in Super Mario 64 DS. It is a harder variation of Memory Match.

The rules are the same as in Memory Match: The player must match the correct pairs of cards to clear the challenge and gain a Star, and the player must have plenty of coins to keep playing. However, there are now 16 cards upside down instead of eight, and the player bets five coins aside three. Every time Luigi deals the cards, four of them flip, allowing the player to have a clue to find their twins afterwards. Earning five Stars makes Luigi deal 18 cards, six of which are flipped, and earning ten Stars and more makes him deal 20 cards, eight of which are flipped. When the player taps two different cards, a coin is taken away from the bet number. Losing all these coins removes one Star gained from the challenge. Once the player has spent all their money to bet, the minigame ends.

If Memory Match was a piece of cake for you, try out this harder version. You now have more cards to play with.