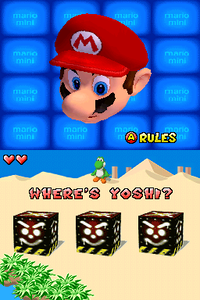 Tox Box Shuffle is one of Yoshi's minigames in Super Mario 64 DS. It is based on the shell game.

Oh no! Yoshi's trapped in a Tox Box! Find which one he's in to save him!