The Princess's Secret Slide is one of the secret levels in Super Mario 64 and Super Mario 64 DS, as well as being one of the three slides in the games. The entrance to the course is in the Princess's room, located behind the ★ door marked with a "1" on the mezzanine of the Mushroom Castle. Inside the room are three stained glass windows with images of Princess Peach on them. Jumping into the one on the right leads to the slide. In the DS version of the game, the room is expanded to include the locked doors with Mario, Luigi, and Wario behind them, and the number of stained glass windows is reduced from three to two, but the stained glass window on the right still leads to the slide. The level is also used as one of the four courses in the VS mode.

This level and The Secret Aquarium are the only two hidden courses outside the Bowser courses to retain their original names in the DS remake.

Map of The Princess's Secret Slide in Super Mario 64 DS

The bottom end of the slide

The player starts in a room with a Blue Coin Block to the right. Once the player enters the slide ahead, a timer begins. The slide first takes the player down a large tunnel, which leads to a steep downward slope. After a large 270-degree bend is a series of drops with a 1-UP Mushroom in this area followed by several bends, ultimately leading to the final room of the slide. If the player falls off the slide, they will be brought back to the lobby of the castle with no life lost. In the VS mode course, the first Power Star can be found at the start, the second is in the middle of the slide, and the last three are in the final room.

This is the only secret course that contains Blue Coins, and the only course that has no Red Coins in the original game. 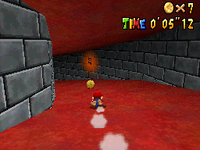 This secret stage has two Power Stars to collect, and it is the only stage in the original game to contain two of the castle's Secret Stars.

The player must ride the slide all the way to the bottom and hit the yellow block to collect the Power Star.

The music that plays in the course is a variation of the Bob-omb Battlefield's theme (also the main theme of the game), as well as Cool, Cool Mountain's music, involving a Western style, with an instrumentation of a harmonica, a bass, drums, a banjo, and a whistle. This music can also be heard during the races with Koopa the Quick and in most other secret courses, in secret areas that involve a slide, and in other regular courses such as Tick Tock Clock and Rainbow Ride.

The Princess's Secret Slide coverage on other NIWA wikis: