A Stump from Super Mario Galaxy

“I want to stomp a stump!”
—Honeybee, Super Mario Galaxy

Stumps are objects found in most 3D Mario games and the Yoshi franchise. They can be ground-pounded by any character, and they may or may not result in something happening. They more resemble wooden pegs in Super Mario 64 and its remake, but they are changed to look more like tree stumps starting in Super Mario Galaxy.

In Super Mario 64 and its remake, stumps are seen throughout the Bob-omb Battlefield and the "huge" side of Tiny-Huge Island. In Super Mario 64 DS, they are also found on Whomp's Fortress and Tall, Tall Mountain. Ground-pounding them three times may release coins (in the DS version, they may also release mushrooms). In Super Mario 64 DS, Wario needs to pound a stump only once to drive it all the way into the ground. Stumps play a minor role in the mission Behind Chain Chomp's Gate in the Bob-omb Battlefield, where a Chain Chomp is tied to one; ground-pounding it three times frees the Chain Chomp, who will in turn break the gate that was blocking a Power Star.

If the player runs around an intact stump five consecutive times, five coins will appear from it; this can be done only once per stump.

In Super Mario 64, even if a stump is stomped all the way, the sound effect of pounding a stump will still play if ground-pounded again. This mistake was corrected in Super Mario 64 DS. 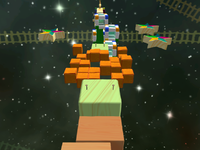 Although not stumps, Nails[1] behave near identically to stumps of Super Mario 64 in Super Mario Sunshine. They are found in various secret levels, such as The Hillside Cave Secret. Most give a coin when fully Ground Pounded, while some give a 1-Up Mushroom. However, the player cannot run around an intact nail to receive anything like in Super Mario 64.

Stumps reappear in Super Mario Galaxy 2 with the same design and function from Super Mario Galaxy. They still turn red when Ground Pounded. They only appear in the Puzzle Plank Galaxy, Cloudy Court Galaxy, and the Freezy Flake Galaxy.

Stumps reappear in Super Mario 3D Land somewhat rarely, but with the same use as before. They only leave coins, and no longer turn red after being Ground Pounded. Some stumps are raised higher and need to be Ground Pounded twice, though a pound from Statue Mario will pound them in completely.

In the Yoshi franchise, similar objects called posts[2] appear. They are obstacles in Super Mario World 2: Yoshi's Island, Yoshi's Island: Super Mario Advance 3, Yoshi's Island DS, Yoshi's New Island, and Yoshi's Woolly World. They are wooden posts that come up from the ground, and Yoshi must Ground Pound them. In Yoshi's Island DS, Baby Donkey Kong can stomp them straight to the ground in one single ground pound. Coins and Red Coins can occasionally be found in these. They mostly block Yoshi's way and must be ground pounded. In Raphael The Raven's Castle, they are used to attack Raphael the Raven. Posts also appear in Yoshi's New Island and perform the same function. Ground Pound Rebound is one of a few levels to feature them. 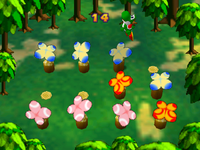 In the third difficulty of the Yoshi's Island microgame from WarioWare Gold, which is based on Super Mario World 2: Yoshi's Island, two adjacent posts can be used to reach and rescue Baby Mario from a bubble.