“Poinks get all full of water and then they go BOOM! Hee hee!”
—Pianta, Super Mario Sunshine

Poinks, also known as Popo,[1][2] are small floating pig-like creatures found in Super Mario Sunshine. They almost always appear in groups. When Mario gets near them, one of the Poinks will attach itself to FLUDD's nozzle. If the player then squirts water, they will start to expand, and if the player releases the R button, the Poink will shoot off in the direction Mario was facing. They are helpful in one of the episodes against Petey Piranha in Bianco Hills. Jumping on a Poink will also cause it to explode. 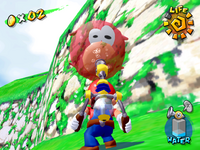 This Poink is as full as it can get

In the battle with King Boo in Hotel Delfino, one of the ghost's attacks can cause Poinks to appear. Here, they can be a hindrance, as they temporarily prevent Mario from using FLUDD to defeat other enemies King Boo spawns.

Switching to any nozzle except the Squirt Nozzle prevents Poinks from attaching themselves to FLUDD. Doing so while a Poink is already attached causes the Poink to explode in a small puff of white smoke.

If a Poink attaches itself to FLUDD's nozzle while its tank is empty, it will still fill with water and fly off when the R button is released.