This article is about the special coin from many games used for collection challenges. For the coin from Wario Land 3, see Colored coin. For the red Banana Coin from Donkey Kong 64, see Banana Coin.
Not to be confused with Pink Coin.

Red Coins (also formatted as red coins)[1][2] are coins that appear at times, along with Yellow Coins in the Mario franchise. The differences between a Yellow Coin and a Red Coin differ by game, but usually, Red Coins serve as important items to collect to get a reward. They are replaced by Purple Coins in the Super Mario Galaxy games, which must be collected to acquire Power Stars.

There are 20 red coins in each level, and grabbing them adds one point for each coin to Yoshi's score tally at the end of the level. In addition, a pink variant of Bandit called the Coin Bandit appears occasionally and holds a red coin; they tend to run away from Yoshi, but if Yoshi grabs the red coin without touching the Coin Bandit, they will instead act the same as a normal Bandit. 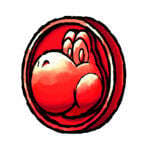 In the sequel to Yoshi's Island, Yoshi's Island DS, red coins work the same way as they did in their first appearance; however, the Magnifying Lens is absent in this game. 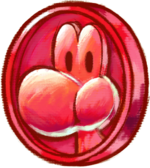 In Yoshi's New Island, red coins serve the same purpose as in the previous two Yoshi's Island games, though they now look exactly like regular coins. 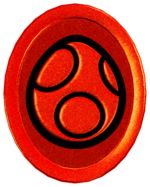 After having been replaced by Stamp Patches in its predecessor, Yoshi's Woolly World, Red Coins return in Yoshi's Crafted World. This time, they are distinguishable from regular Coins in that they spin counterclockwise, whereas regular Coins spin clockwise. Unlike in the previous Yoshi games, they have an imprint of a Yoshi's Egg. 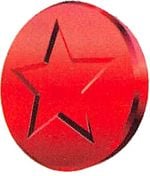 A Red Coin in Super Mario 64

Red Coins made their first main-series appearance in Super Mario 64, and returned in its remake. Each Red Coin is worth two Yellow Coins. Collecting all eight Red Coins in one level makes a Power Star appear over a Star Marker. In Super Mario 64 DS, some Bob-omb Buddies have the ability to detect red coins when the player talks to them.

A Red Coin in World 1-1 in Super Mario Bros. Deluxe

Red Coins are once again seen in Super Mario Bros. Deluxe. In the game's Challenge Mode, they (along with Yoshi Eggs) can be collected to obtain medals. Each stage contains 5 Red Coins, and collecting them all will earn the player that stage's Red Coin Medal if they successfully reach the end. Despite the game's sprites being based primarily off those of the original Super Mario Bros., Red Coins have a vastly different appearance from normal coins, being more round with a circular imprint. The Album Book artwork depicts a Red Coin with Mario's face imprinted on it. 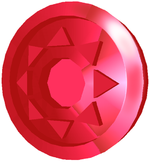 Red coins make another appearance in Super Mario Sunshine. Similar to Super Mario 64, collecting all eight in a level would make a Shine Sprite appear. However, red coins do not affect the player's total amount of Yellow Coins and are treated as a completely different currency altogether. Like blue coins, red coins replenish two health points on Mario's life meter. They appear with an imprint of a sun. Some areas have floor objects called Red Switch Plates[3] (or Red Blocks)[4] that make red coins appear with a time limit.

In addition, red switches are located at the starting platform of Secret Levels, and when the player Ground Pounds the red switches, eight Red Coins appear and the timer is activated. Mario must then collect all 8 Red Coins before time runs out or he loses a life and must restart the level.

Lastly, some of the Shine Sprites in Delfino Plaza and Delfino Airstrip involve collecting Red Coins as well.

Red Coins and Red Rings also make a return in New Super Mario Bros. Wii. They serve the exact same function as in the preceding game and they will still give the player a power-up if all eight Red Coins are collected. However, Small Mario collecting the Red Coins would make a Fire Flower (or other power-ups of similar power) appear instead of a Super Mushroom. Like before, if the player is currently using a Fire Flower or similar power-up, they will get a 1-Up Mushroom after collecting all of the Red Coins.

Red Coins later appear along with Red Rings in Super Mario 3D Land, working like they do in the New Super Mario Bros. games. Unlike those games, however, only five Red Coins appear per ring, rather than eight. 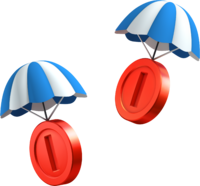 Red Coins appear once again in New Super Mario Bros. 2. Like in the previous New Super Mario Bros. games, Mario or Luigi must collect eight of them to earn a power-up, a 1-Up Mushroom, or a Gold Mushroom (only in Coin Rush mode), depending on his current form. When Mario or Luigi touches a Red Ring, Red Coins could appear in predetermined locations, sometimes falling in parachutes.

Red Coins, along with Red Rings, reappear in New Super Mario Bros. U. Once again, all eight Red Coins must be collected for an item to appear. The similar Green Coins and Green Rings make their debut appearance, which are used in a similar way but five (technically fifteen) must be collected instead of eight. Green Coins also disappear quicker.

In Mario Party-e, Red Coins serve as one of the main collectibles in the minigame Waluigi's Reign. They are worth more than regular coins, giving the players five points when obtained.

In Mario Party: Star Rush, Red Coins can be obtained in any of the Coin Chaos minigames. They do not appear in Level 1 minigames unless an amiibo is used, but they can occasionally appear in Level 2, and very often in Level 3. With the Coin Bag item, five Red Coins will appear. Each Red Coin collected is worth three normal Coins. With the Double Medal item, each Red Coin collected is worth 6 normal Coins. If a Lava Bubble item is used, any source of coins and items currently on-screen; Red Coins included; burn up. However, they can reappear over the course of the game.

In Super Mario Party, Red Coins appear in Partner Party, giving the character five coins when they pass one. Also, a Red Coin is produced from a ? Block in the minigame Strike It Rich if the player times a jump perfectly. Each Red Coin is worth three regular Coins.

Red Coins appear in Mario Golf: Toadstool Tour of the Coin Shoot mode. They are worth 10 coins when the ball is near them.

In Mario Pinball Land, if Mario hits a red ! Switch hard enough, eight Red Coins pop out and land in almost every area in the world. Mario has to find the eight Red Coins around the world within the time limit, similar to the red coin missions in Super Mario Sunshine. Once Mario obtains all of the Red Coins in time, he obtains a Power Star, otherwise the red coins disappear and need to be collected again in the same locations after hitting the red ! Switch again. Collecting a red coin also counts as one regular coin.

Red Coins in Mario Power Tennis appear as 8-bit Mario Bros. sprites in the mini-game Coin Collectors. They are worth fifty points when collected. 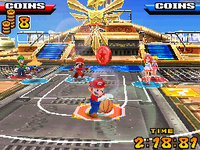 Mario dribbling the basketball on the ? Panel to randomly get rewarded a Red Coin

Red Coins appear in Mario Hoops 3-on-3 under the name 10 Coins. They can be found in ? Panels, and as evident by their name are worth ten normal Coins. They are only found if the player manages to combo the dribbling of acquiring the coins without being interrupted. These coins have a star imprint unlike the regular coins in the game. 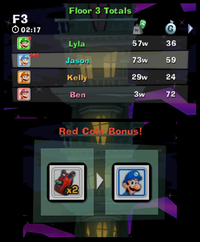 Players having collected all four Red Coins in ScareScraper mode

Red Coins appear in the 3DS title, Luigi's Mansion: Dark Moon, with a slightly more octagonal shape. In some missions, there are hidden challenges where Luigi must collect the eight Red Coins within a time limit to reveal a treasure chest. They also appear as upgrade bonuses in the multiplayer mode, ScareScraper. Each time a floor is cleared, four Red Coins appear. Whoever collects the most Red Coins has a better chance of getting an upgrade.

Red Coins make appearances in the Dream World of Mario & Luigi: Dream Team as a time-based challenge. In locations such as Dreamy Somnom Woods or Dreamy Wakeport, hitting a Red Coin Block spawns eight Red Coins in a specific area. Mario and Dreamy Luigi must collect all of them to progress.

Red Coins and Red Rings return in Mario + Rabbids Kingdom Battle, where eight of them need to be collected. Collecting all eight reveals a treasure chest containing a new weapon for Mario and co. to use. 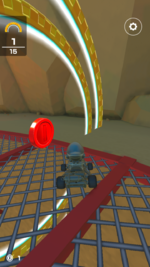 In Mario Kart Tour, Red Coins appear in the Coin Rush mode and in bonus challenges. The Coin Box+ Special Item may also spew Red Coins in place of normal coins. As in Super Mario 64, they are worth two coins.