Dunk Hammer[1] is a Bros. Action that appears in Mario & Luigi: Superstar Saga and its 3DS remake, Mario & Luigi: Superstar Saga + Bowser's Minions. In the former, this move is known as Luigi Dunk.[2] It is taught by Cork and Cask in Chateau de Chucklehuck along with the Mini-Mario technique. When Mario whacks Luigi from behind with his hammer, Luigi will be buried into the ground, unless the two are above certain surfaces such as metallic plating. While in this state Luigi can move underground, allowing him to pass under obstacles and jump into barrels from beneath, though he cannot pass through some surfaces.

If Luigi passes through an obstacle in which Mario cannot follow, like a metal gate, he will be separated from him. Luigi can also be used to find beans hidden in underground spots marked with an "X", and also Bean Fruit and Beanstones. Once Luigi has emerged from the ground, he cannot go underground again without Mario's help. If this is used over a rectangular hole near bodies of water, Luigi will be turned into a surfboard that Mario can use to surf across Oho Ocean to reach Joke's End later in the game. The in-battle equivalent to this move is Chopper Bros., and it is also used in the advanced version of the Thunder Bros. Bros. Attack. If Mario surfaces Luigi under certain enemies and pop out of the ground in the overworld, the enemy will be launched into the air and fall back down stunned, which allows the bros to either escape or First Strike them more easily. 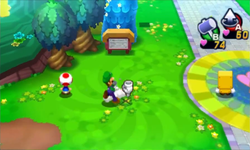 In Mario & Luigi: Dream Team, Mario and Luigi switch roles and the move is now known as Mole Mario, but is functionally identical. It is taught by two Shelltops working for Britta in Dozing Sands along with Mini-Mario, which is used instead of Mole Mario if the move is attempted above hard ground.