“You like that, buddy? It's called teamwork! Unless you KO all 3 of us at once, we can't lose!”
—Private Goomp, Mario & Luigi: Dream Team

Private Goomp is a Goomba who wears blue pajamas, and a minion of Bowser, introduced in Mario & Luigi: Bowser's Inside Story. However, he retroactively first appears as one of the first two Goombas and thus enemies that the Mario Bros. fight in Mario & Luigi: Superstar Saga, as revealed in the remake of the game. 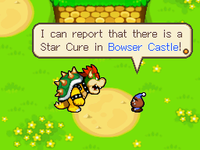 Private Goomp talking to Bowser about one of the Star Cures in Blubble Lake.

In Mario & Luigi: Bowser's Inside Story, he is first seen with Corporal Paraplonk and Sergeant Guy trying to take back Bowser's Castle with a Banzai Bill Cannon. However, they don't have ammo, leaving their king to get some. When Bowser acquires a Banzai Bill, his three underlings fire it into the castle.

At the Treasure Chamber, Private Goomp returns with his former companions, watching as giant Bowser defeats the Fawful Express, and as Mario and Luigi repair Bowser's memory of the combination. Once he opens the safe, however, the three quickly push him inside, stating that Fawful bribed them with extra rations. This same safe is later found in Peach's Castle.

Private Goomp is later seen after the closing credits of the game. Private Goomp and his two companions visit Bowser, who is bedridden after a fight with the Mario bros. They apologize for their treason and ask to rejoin the Koopa Troop. Bowser pardons them along with the rest of his minions on the condition that they help with repairs on his Castle.

Private Goomp reappears in Mario & Luigi: Bowser's Inside Story + Bowser Jr.'s Journey, reprising his role in the main game. Private Goomp also appears as an enemy and a recruitable ally in Bowser Jr.'s side story. He first fights alongside other Goombas, and fights again alongside Corporal Paraplonk and Sergeant Guy where he is the captain. In the post-game of the story, it was revealed that while Bowser pardoned him and his comrades of their treason against him, the rest of the Koopa Troop has yet to forgive them and even shunned them, citing they have to "earn back [their] trust," and Bowser Jr. believes their treason was due to being under the influence of the Malatone Formula:X earlier. Goomp also ends up being made Bowser Jr.'s "sparring partner for life", replacing his friend and rival Captain Goomba, much to the latter's barely hidden relief. Captain Goomba then offers "encouragement" to Goomp, sarcastically stating it was an honor to be Bowser Jr.'s "best friend" (although he nearly lets slip his true views of the relationship as "punching bag" before stopping himself).

In Mario & Luigi: Dream Team, it is revealed that Private Goomp was promoted along with his associates to "Bowser's Royal Guard", and now has a black hat with a Bowser emblem on it. He travels with Bowser to Pi'illo Island to find Princess Peach. Private Goomp also helps Kamek disguise as Princess Peach forming a lower section of the disguise. It is also shown that he and his associates dream of bossing around Kamek and Bowser one day. The trio are also fought in a boss battle as the Elite Trio.

After Private Goomp and his allies have been defeated, Kamek demotes them to janitors and sends them back to the castle. As Mario & Luigi make their way to Bowser after Antasma's defeat, Private Goomp and his comrades attempt to defend Bowser by rolling lots of Mega Bob-ombs down the path to him. After Bowser is defeated, he, Kamek, Private Goomp, Sergeant Guy and Corporal Paraplonk decide to retreat. Although Bowser is mad that his plan failed and that it was Antasma's fault, he tells his three minions that they did pretty well by their usual standards, much to their joy.

Private Goomp appears in the side story mode Minion Quest of Mario & Luigi: Superstar Saga + Bowser's Minions with a larger role than the rest of his team, and he serves as a rival to Captain Goomba, the Goomba he fought with against the Mario Bros in the original game, revealing he was once an ordinary Goomba. He initially attempts to blow off Captain Goomba's attempts at saving Bowser to do so himself. However, Fawful ended up brainwashing him with a gas, forcing them to fight. Private Goomp was ultimately defeated, but Fawful managed to steal away Bowser, also sending them flying. He and the rest of the trio also appeared and joined with the group. However, they were also responsible for setting up the Koopa Cruiser with a time bomb while Roy was fighting them under Fawful's orders as a fallback strategy in case Roy failed to beat them. He appears in the missions Goombas vs. Goombas, Silly Ol' Goomp, The Rival Trio and The Trio's Last Stand. He is a melee trooper, and has the Special Skill Rocket Headbutt, allowing him to headbutt enemies by jumping on them. While battling Private Goomp, he can use the Clash of Captains Captain Command.