The Shroobs are a race of aliens from the Shroob planet that appear in Mario & Luigi: Partners in Time and serve as the main antagonists. The Shroobs invaded the Mushroom Kingdom when Mario and Luigi were babies. They are a purple, mushroom-like species ruled by Princess Shroob and her older twin sister. Their name is a corruption of the shortened word for mushroom, "shroom". The Shroobs are dark purple mushroom-shaped creature with bluish-white spots at the top, have very stubby bodies and limbs, have hands with pincers at the ends, have gaping mouths with a pair of fangs on the top, and have black eyes with red pupils.

The Shroobs rely primarily on ray guns as weapons and they employ fleets of flying saucers, powered by the vim of Toads, which is collected by capturing the Toads and draining the vim through the Shroobs' Tree Network, all leading to the Vim Factory. The saucers are capable of shooting energy bolts that turn people into Shroob mushrooms as well as damaging buildings. 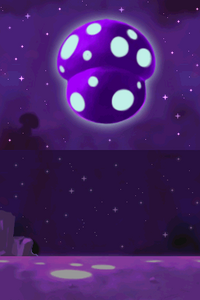 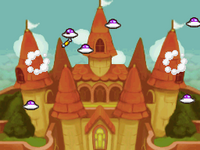 The Shroobs taking over Peach's Castle.

According to the prologue of the game, the Shroobs invaded the Mushroom Kingdom because their home planet is dying. The Shroobs start their invasion by destroying Toad Town and capturing many Toads. These Toads are taken to Toadwood Forest, where their vim is drained by the forest's genetically-altered trees. The vim is then collected at the Vim Factory, which is guarded by mind-controlled Hammer Bros; Dr. Shroob feed the vim to Swiggler, a bio-engineered Wiggler that drinks the vim to power the Shroob saucers.

While attacking Toad Town, they also attack Peach's Castle in hopes of capturing the Princess Peach of the past, but she has left alongside with Baby Mario, Baby Luigi and past Toadsworth in the Koopa Cruiser by the time they get in the castle, thanks to Baby Bowser. They instead find the Princess Peach of the present and her subjects, Toadiko and Toadbert, who have traveled back in time using E. Gadd's time machine. They take Toadiko to Toadwood Forest, and Toadbert ends up getting eaten by Yoob after ending up on Yoshi's Island (possibly suffering from amnesia right afterwards). Princess Peach manages to trap the Elder Princess Shroob in the Cobalt Star, the time machine's power source, and then shatter it and scatter the shards around the kingdom, before getting captured by the younger Princess Shroob. Meanwhile, the Junior Shrooboid uses the time machine to travel back to the present, ending up at the throne room of the present-time Peach's Castle and alerting the Mario Bros. that something was amiss.

When present-time Mario and Luigi travel back to the past via a time hole and reach Hollijolli Village, they find that the town is attacked by Shroob saucers, and they encounter the Shroobs for the first time. Unfortunately, during the battle the Bros. are knocked out by a huge energy ball sent down by a Shroob saucer, which prompts their past selves to go down to the village and save them, bringing them back to the Baby Bowser's Koopa Cruiser. However, the airship is later attacked by Princess Shroob via a Shroob missile, sending it crashing into Baby Bowser's Castle.

Soon after, they start the creation of the mechanical Yoob and attack Yoshi's Island. Yoob starts to eat any Yoshis it can find. These Yoshis will then most likely be converted into more monstrous Yoobs and be used to attack the Mushroom Kingdom, preventing the Yoshis from helping the kingdom in the process. However, Mario, Luigi, Baby Mario, and Baby Luigi go to stop it, but are eaten in the process after the Shroobs use their Shroob saucers to make Yoob grow to monstrous proportions. Inside, they find the eaten Yoshis, Toadbert (who has lost his memory), Baby Bowser (stuck inside of an egg), and Sunnycide, who blocks the exit of Yoob's belly.

The Shroobs later commandeer the Koopaseum in Gritzy Desert, using it as a stadium in order to celebrate the conquest of the Mushroom Kingdom. On stage, Princess Shroob feeds Princess Peach to the monstrous Petey Piranha. Mario and company chase it under the colosseum after taking out the Shrooboid Brat, and defeat Petey, though they learn that Princess Peach was spat out by Petey Piranha earlier and taken deeper inside the cave. Before the four can save her, however, Princess Shroob disguises herself as Princess Peach, with the intention of fooling them into taking her into the Mushroom Kingdom of the present to take it over, and thus make sure her plan would succeed.

The disguise also manages to fool Bowser, who came to Peach's Castle to kidnap Princess Peach again, taking Princess Shroob with him through a time hole to Thwomp Volcano. After he and Baby Bowser are defeated in Thwomp Caverns, the Shroob Mother Ship comes and takes back Princess Shroob, with Mario, Luigi and their baby counterparts in pursuit. During their search for the princess inside the ship, they are surrounded by a group of Shroobs in a room. Princess Shroob then approaches them and takes off her disguise, revealing herself. Before she can do anything about the quartet, a disguised Kylie Koopa saves them, though they are ejected out of the Mother Ship shortly after.

Despite regular Shroobs being the main kind of Shroob seen in Mario & Luigi: Partners in Time, only three are fought in the entire game during the scripted unwinnable battle in Hollijolli Village. They use the same defeat animation as normal enemies despite being considered bosses, a trait shared with the Junior Shrooboid, the Hammer Bros., and Kamek. Also, in the Player's Guide, the word "boss" is missing from the stat box. 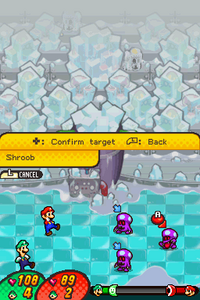 In Mario & Luigi: Bowser's Inside Story and its remake, Mario & Luigi: Bowser's Inside Story + Bowser Jr.'s Journey, while looking for a seat in the Fawful Theater, a Shroob can be seen in a seat on the lower right-hand corner. If Bowser tries to speak to it, it stares blankly without saying anything. Much later in the game, a group of three Shroobs appears as an optional boss. They are found in the preservation room in Bowser's Castle, which needs a password to be accessed. The password of the cold room is □, □, ○, △, △, △, followed by hitting the switch on the door itself, with signposts that are found in Bowser's Castle hinting at what the password is. Once inside, the Bros. must hit a red switch that causes three of the Shroobs to unthaw. As Mario and Luigi begin to explain their history to Starlow, the three Shroobs wake up and attack the brothers.

They have two attacks that were very similar to the ones (especially the Guardian Shroobs) they used in Mario & Luigi: Partners in Time. For the first, the attacker will flag down a companion, and they will each shoot a laser at Mario and Luigi. The other attack is a simple laser blast, delivered to only one brother. Before executing this attack, the attacker will always pirouette; in Mario & Luigi: Partners in Time, they would pirouette only before attacking Luigi, and spark before attacking Mario. Here, the brother being targeted is indicated by the spin's direction: a Shroob spins clockwise to attack Mario, and counterclockwise to attack Luigi. In the remake, each of the Shroobs gain the Fury status after losing half their HP, like other bosses, and will fire lasers much faster.

After defeating them, Mario and Luigi receive all ten Attack Pieces for the Magic Window Special Attack. They also receive the Shroob Boots, which may lower the attack power of stomped enemies. Starlow then compliments Mario on stopping the invasion as a baby; when he explains that Luigi fought hard as well, Starlow sarcastically remarks that he did so by "ferociously crying", referencing the baby tears that were ultimately the aliens' downfall. When she learns that it was indeed Luigi who ultimately trumped the Shroobs, she apologizes to him and calls him "super". Despite being bosses, the Shroobs use the same death animation as normal enemies; this also occurs with Bowser Memory ML.

The Shroobs, along with the Elite Goombule and Bowser X, were not in the Prima Guide Enemy Compendium; however, the Shroobs were mentioned in the walkthrough.

In addition to reprising their roles in Mario & Luigi: Bowser's Inside Story + Bowser Jr.'s Journey, multiple Shroobs appear as ranged enemies in the Bowser Jr.'s Journey mode, where they attack using their ray guns and are weak to Swoops. The Shroobs battle Bowser Jr. in Chilling Magma after he, Kamek, and Morton go into the basement of Bowser's Castle to retrieve Ever Ice. After the Shroobs are defeated, Bowser Jr. is able to collect the Ever Ice. Several Shroobs also appear in later missions such as The Lost Alien, The Power of the Koopalings and The Best Beast, with some under the effects of Malatone Formula:X.

In Mario & Luigi: Dream Team, a photo of a lone Shroob is seen in Kylie Koopa's office in Wakeport.

Although they do not make an actual appearance, the Mario & Luigi: Bowser's Inside Story sprites for Shroobs can be found in the game's files alongside other leftovers.

In Mario & Luigi: Superstar Saga + Bowser's Minions, a picture of a Shroob in a saucer can be found in the Mario Bros.' House, and a poster for a Shroob movie can be seen in the Yoshi Theater.

In Super Smash Bros. Brawl, a Shroob appears as a Sticker that raises launch power by seven.

Shroobs appear in volumes 35, 36, and 37 of Super Mario-kun. They retain their look from the games, and can speak human language.

The Shroob language is displayed as nonsensical small picture text, with one phrase in particular repeated throughout the game; the Shroobs' voice clips consist mostly of gibberish sounds. The actual audio for them speaking is usually either a high pitched and sped up text scrolling sound or a high pitched laugh. Some of the Shroobs, such as the crowd in the Shrooboid Brat fight, do occasionally use the letters "M" and "L", likely associating them with Mario and Luigi due to the letters on their caps. The Elder Shroob Princess is a notable exception, as she often speaks clear English (albeit in all capital letters) whereas her younger sister speaks translated English. During the game, the language is occasionally shown to players using subtitles in parentheses to clarify; this reveals that the phrase constantly repeated by the Shroobs translates to "Destroy!"

Princess Shroob with some Shroobs.