Not to be confused with Squiggler.

Swiggler is a large, Shroob-created, bio-mechanical green Wiggler with yellow spots that appears in Mario & Luigi: Partners in Time, who acts as the boss of the Vim Factory in Toadwood Forest and is found on the bottom floor of the factory. Swiggler's name is a portmanteau of the word "Wiggler" and the word "swig", a small sip. Swiggler has the unique ability to transform the vim sucked from Toads into a fuel source for the Shroobs' Shroob saucers. It drinks vim from a glass and then transfers it into the saucers via tubes in its body to which they connect. It is the first boss to be fought by all four Mario brothers. 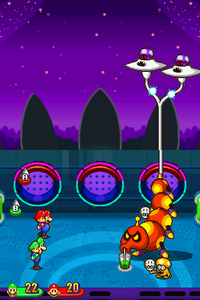 During the events of Mario & Luigi: Partners in Time, Mario, Luigi, Baby Mario, and Baby Luigi confront Swiggler deep inside the Vim Factory, who is drinking glasses of vim to power Shroob saucers. After Baby Mario hits knocks over one of its glasses with his hammer, Swiggler turns red, indicating that its angry, and attacks the quartet.

In battle, Swiggler can shoot poisonous clouds at the brothers. These attacks can be countered with Hammer hits, with some taking two hits to stop, and might poison the brothers if not countered. Swiggler also has a glass of green vim, which it drinks and uses to power-up nearby Shroob saucers. This allows them to shoot energy blasts at Mario and Luigi. The brothers can jump over these blasts to avoid damage. The left blast will shoot at Mario, and the right blast will shoot at Luigi; however, they can swap places.

Attacking Swiggler proves to be relatively useless, as it has extremely high defense and will always counterattack the brothers with several shockwaves immediately afterwards, forcing them to jump to avoid them. This attack comes in addition to Swiggler's regular attacks.

During the fight, Swiggler is aided by two Dr. Shroob guards. If one is destroyed, another Dr. Shroob will appear to take its place. The Dr. Shroobs behave exactly as they do in earlier encounters: they use red and gray Mushrooms to grow and shrink, respectively, attacking once they assume the new form. By attacking them, the brothers can knock the Mushrooms into Swiggler's vim drink. If a gray Mushroom is knocked in, Swiggler will become sick upon drinking it, lowering its defense and making it unable to attack for a few turns. On the other hand, if a red Mushroom is knocked in, the solution will heal Swiggler by either 21, 41, 71, or 86 HP.

After the battle, Swiggler is destroyed and drops the second Cobalt Star shard. However, Baby Bowser arrives and steals both shards in their possession (the first one was acquired in Baby Bowser's Castle), jumps in his Koopa Clown Car, and flies to Yoshi's Island with Kamek.