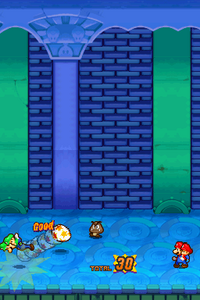 Smash Eggs are Bros. Items found mostly in Yoshi's Island in Mario & Luigi: Partners in Time. Smash Eggs have orange and yellow star-shaped spots. Mario, Luigi, and the babies can kick these eggs to the enemy. Once the first kick has set the Egg in motion, the Mario Bros. must prime themselves for when the Egg comes back down. The player must hold either A or B and release it at the correct time to kick the egg back at the enemy. Failing to do so will result in the Mario brother tripping and losing the Egg. Additionally, the babies can jump and hit the Egg to make it fall faster and cause more damage with the next hit; however, doing so will cause the timing to change. The egg-kicking can be done repeatedly until the Smash Egg breaks up, releasing an item or a Bros. Item. If a Smash Egg is used too many times between battles, no prize is released.