A Snifaro is a Snifit enemy found in Gritzy Caves in Mario & Luigi: Partners in Time. The name "Snifaro" is a portmanteau of "Snifit" and a corruption of "pharaoh," the name applied to ancient Egyptian rulers who Snifaros are designed after (using the traditional pharaoh mummies' sarcophagus and wearing stereotypical pharaoh headdresses). The headdresses contain a small Koopa Troopa head on the top. In the field, Snifaros slide over the floor in their sarcophagi, their feet pointed in the direction last moved in; if approached by the Mario Bros., they will charge.

Snifaro starts out covered by a floating sarcophagus except for its masked head, and has two main attacks. For the first, it positions itself in front of one of the Mario Bros. and opens up its sarcophagus, revealing that it is standing on top of an ordinary Snifit. The Snifaro and Snifit then fire one bullet at the target, one after the other. If the sarcophagus lid opens to its right (away from the camera), the Snifaro fires first on top; if it opens to its left, the Snifit fires first on bottom. The Snifit can be easily dodged by a jump, and the Snifaro is likely to hit the Mario Bros. if jumped, although it is possible to successfully jump over the top bullet. Their second attack has the Snifaro jump out of the sarcophagus and ride it like a rocket. The Snifaro flies high and then attempts to crash into a Mario Brother. If the Snifaro rides the sarcophagus normally (over the object), it attacks Mario. If the Snifaro places itself under the sarcophagus, it attacks Luigi. This attack can be dodged or countered by jumping which if not, it may cause the trip status effect. After the attack, it will go offscreen and come back in its normal form.

If a Bros. Flower is first used against a Snifaro, its sarcophagus burns up. The Snifit that was inside the sarcophagus then runs away, leaving the Snifaro to fight on its own. The exposed Snifaro attacks faster and is slightly weaker. Its attack consists of walking up to a Mario Brother and shooting one or two bullets from its mouth; this can be avoided by jumping. 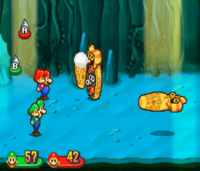