From the Super Mario Wiki, the Mario encyclopedia
(Redirected from Baby Drill)
Jump to navigationJump to search 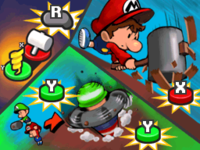 Instructions for the Baby Drill in Mario & Luigi: Partners in Time

In Mario & Luigi: Partners in Time, Baby Mario and Baby Luigi learn Baby Drill shortly after they receive their hammers in the Vim Factory from the Hammer Bros. after freeing them from their mind control, during the hammer tutorial. It allows them to burrow underground, avoiding enemies and allowing them to slip under the tightest spaces. The babies cannot dig through hard materials (such as metal), and can receive a bean if they surface while underneath a marked ('X') spot. If they surface under an enemy and pop out of the ground in the overworld, the enemy will be launched into the air and fall back down stunned, which allows the babies to either escape or First Strike them more easily.

Drill Bros. returns in Mario & Luigi: Bowser's Inside Story and Mario & Luigi: Bowser's Inside Story + Bowser Jr.'s Journey, this time being used by Mario and Luigi and learned at the Energy Hold. When Mario and Luigi spin into a drill-like bone inside the Energy Hold, they come across an extremely small space. Mario and Luigi get the idea to drill into the ground using their hammers, thus learning Drill Bros. It serves a similar function to the last game, letting them traverse under small and tight areas than not even Mini-Mario can travel through, activate certain things inside Bowser's body, and dig out beans in the overworld, marked with again an 'X'. They can also find Beans in Bowser's body, except they are marked by sparkling spots instead of an 'X'. The move can also be used to collect Mushroom Balls in Toad Town Mall, and is also required to stop the pain in Bowser's back in the Lumbar Nook.

The Baby Drill appears in volume 35 and 36 of the Super Mario-Kun. Rather than using it as a technique for digging up beans, the Baby Mario brothers use it as an offensive attack. Unlike in the game, Baby Luigi carelessly swinging his hammer around gives Baby Mario the inspiration of the move rather than the Hammer Bros. teaching it to them. They use the move to attack Swiggler, Mrs. Thwomp, and even the adult Mario Bros. The babies' positions also alternate, unlike in the game, where Baby Luigi is always on the top. The babies also do not require hammers for the move in the manga.