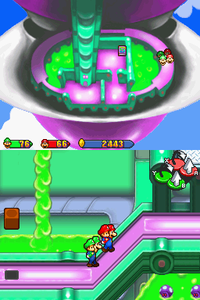 The Shroob Mother Ship is a large spacecraft primarily used by Princess Shroob for combat and transportation in Mario & Luigi: Partners in Time. The ship resembles a large, pink Shroob saucer; subsequent to their invasion of Mario's planet, the Shroob's mother ship usually appears to hamper the bros.' efforts to halt the Shroob invasion. The Shroob Mother Ship is the only full-length area in the game that cannot be accessed once the four heroes leave.

After Mario, Luigi, Baby Mario, and Baby Luigi defeat Bowser and Baby Bowser in Thwomp Caverns and seemingly rescued Princess Peach, the Shroob Mother Ship sucks the brothers and "Peach" into the ship. While inside the mother ship, the Mario Bros. discover that the "Peach" they had rescued from the Bowsers is actually Princess Shroob in disguise, and she promptly tries to destroy Mario and company. Before she succeeds, however, Kylie Koopa saves the bros. The heroes then travel to the mother ship's second floor, and while trying to use a key on that floor, the bros. get dropped into the now-wrecked Toad Town, while Kylie gets dropped into Yoshi's Island.

The mother ship itself is largely linear and pseudo-2D, with long, straight sections which wrap around the perimeter of the ship and overlook a vast pool of slime in which several Shroobs are swimming. Guardian Shroobs patrol the area, and can be battled for Experience Points and coins.

Later, while in Shroob Castle, the bros. finally find the real Peach; however, Princess Shroob then takes the opportunity to use the mother ship to open fire on her own castle in an attempt to finish the bros., forcing them to engage the mother ship in battle by using the castle's own head, which has an interior identical in layout to a room inside another UFO that the Mario Bros. had used earlier. After its defeat, the Shroob Mother Ship crashes into Shroob Castle, taking out a barrier which had imprisoned Peach before the mother ship's destruction.