Not to be confused with Toad doctor or Dr. Toad. 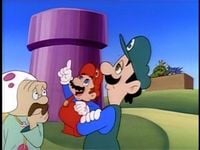 The doctor, with Mario and Luigi, while Bowser and Kooky are watching.

The doctor is a Toad doctor, and a minor character from The Adventures of Super Mario Bros. 3 The doctor only appears in Reign Storm. Prior to the events of the episode, he is the one who figured out that Princess Toadstool was overworked, and needed a vacation away from the Mushroom Kingdom and the Mario Bros..

Very little else is known about the doctor, as he had no lines, and was only seen and mentioned towards the start of the episode.