It has been requested that this article be rewritten and expanded to include more information. Reason: include what happens after the Shroob-omb explodes harmlessly in case of two or all three Support Shroobs being defeated simultaneously

Dark Fawful Bombs from Mario & Luigi: Bowser's Inside Story bear a strong resemblance to Shroob-ombs. They both are larger than normal Bob-ombs, both are purple, and both are carried by other enemies. 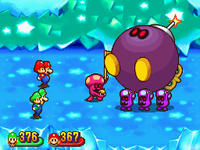