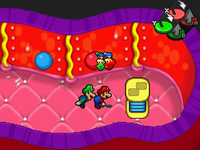 Baby Toss is a move used in Mario & Luigi: Partners in Time. In it, Mario and Luigi throw their baby counterparts, Baby Mario and Baby Luigi, off of their backs when they are riding piggyback. The move is learned in Bowser's Castle.

Early on, this move helps the babies get to higher platforms and go down cylindrical objects; later in the game, the Baby Spin is used.

If the babies get tossed into battle using the Baby Toss, they do not have their older selves to fight with.