The Toadwood Forest is a forest located in the Mushroom Kingdom in Mario & Luigi: Partners in Time. The forest is located between Bowser's Castle and Peach's Castle. The Shroobs use the forest to harvest vim from Toads to use as fuel. Monsters such as Koopeleons, Boo Guys, and Elasto-Piranhas reside in the forest.

During the Shroob invasion, Toads are abducted and placed on the forest's trees, which drain their life force, known as vim, out of them, slowly weakening the Toads until they are petrified into the trees. The vim is transferred through the roots of the trees to the Vim Factory, a huge Shroob-created building built in the middle of the Toadwood Forest. Once there, the vim is altered by Swiggler with chemicals and turned into fuel for the Shroob saucers.

The Mario brothers and their baby counterparts travel to the Toadwood Forest of the past after the Cobalt Star shard retrieved from Baby Bowser's Castle opens a time hole to that location. As they journey through the forest, they encounter multiple Toads strapped to the trees. They eventually reach Toadiko, who reveals what happened to her, Toadbert, and Princess Peach after they traveled to the past and tells the Shroobs' plans to the Mario brothers. Before Toadiko can finish, five Shroob saucers attack and turn her into a Shroob mushroom. However, the brothers manage to evade the attacks. After burning the trees blocking the way to the Vim Factory, they take a Warp Pipe to bring them closer to the factory.

In the next area, the brothers and the baby brothers activate two switches to raise the platforms in front of the factory's entrance, allowing access.

The second area features pits filled with thorns. To cross them, the baby brothers must use a block to control the floating panel[2] while the adult brothers are riding it. ? Blocks are found above safe ground and barrier platforms, which only appear over the largest pit. Warp Blocks are found on the other side to reunite the brothers. Two statues are in the second area, each of which requires Simultaneous Blocks to be hit by all four brothers to activate them. After activating both statues, they reveal a bridge that allows the brothers and baby brothers to enter the Vim Factory. 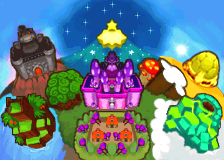