This article is about Yoob's Belly, a location in Mario & Luigi: Partners in Time. For other uses, see Belly.

Yoob's Belly is a location in the game Mario & Luigi: Partners in Time.

During the events of the game, Mario, Luigi, Baby Mario, and Baby Luigi find Kamek and Baby Bowser on Yoshi's Island's mountaintop, possessing the Cobalt Star shards they need. After beating Kamek, they pursue Baby Bowser, who had ran off. While trying to get the Cobalt Star shards, which Baby Bowser eats out of spite for eating his cookies prior, two Shroob saucers pass by and notice the group. They fly towards Yoob and fire a beam at him, causing him to grow immensely. This allows him to see the group at the top of the mountain. Yoob proceeds to eat Baby Bowser and the four Mario Bros. Now inside Yoob, the brothers try to find a way out, and at the same time find Baby Bowser and rescue the Yoshis. After rescuing a few Yoshis, they manage to push a Chomp Rock down a small passage in Yoob, widening it and allowing them to proceed.

Eventually, they find out that Yoob also has a bio-engineered factory inside of itself, which traps Yoshis in eggs. This transforms them into Yoobs if they are not freed in time. The four soon find Toadbert. He was on the E. Gadd's time machine alongside Princess Peach and Toadiko, but cannot remember a single thing about what happened to her, except for one thing, which he depicts through a picture of Peach battling Princess Shroob. The quartet proceed to the end, where they find Sunnycide, who blocks their exit and looks after the eggs. After beating it, the passage opens, which the Yoshis, Toadbert, Baby Bowser and the four heroes exit through. Yoob, having its source of energy (the eggs) gone, "deactivates" and hangs on the mountainside. 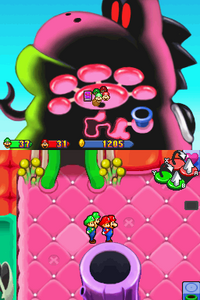 Mario, Luigi and their baby selves inside the first area of Yoob's Belly

The first section of Yoob's Belly consists of a main room branching off into five other rooms. The main room also has protrusions that the babies brothers can be thrown into. One of these protrusions contains a fruit which must be given to the yellow Yoshi. The left-most room contains a red Yoshi trapped by an RC Shroober which must be fought. The second room from the left contains two spots that change colors when hit by a hammer. When those spots match the colored spheres on the wall, an opening appears. The baby brothers must use Baby Drill to pass underneath. The following room has sixteen of the colored spots which must be matched with the spheres in the other room to free the blue Yoshi. The middle room contains a Save Album and many enemies. The fourth room from the left contains many spikes and a trampoline that the baby brothers can use. Taking the trampoline takes them to a room with five holes. The baby brothers must drop down the middle hole to reach the pink Yoshi. Hammering the spot nearby forms platforms above the spikes, freeing the pink Yoshi. The right-most room contains a cyan Yoshi being attacked by an RC Shroober. Baby Drill must be used to reach an adjacent room that contains a pump. Baby Mario must use Baby Pump to hit the RC Shroober's Shroob saucer. Doing so blows up half the wall, allowing the brothers to fight the RC Shroober. Saving these Yoshis allows them to push the Chomp Rock, opening the path ahead. Going down the newly formed path leads to a Warp Pipe.

Taking the Warp Pipe takes the brothers to the second section of Yoob's Belly. The first room contains many enemies. The second room contains two eggs containing Yoshis which must be smashed open by hitting the blocks they are in and pushing them into a wall with Baby Pump. Doing so allows the Yoshis to push the Chomp Rock blocking the way. The third room contains more enemies and branches into two rooms. The bottom room contains Yoshis that give the brothers items if they are spoken to and a 4-Bros. Random Block. The top room must be opened by pressing a 4-Person Panel. In this room, Toadbert explains he lost his memory and gives the brothers his drawing. The penultimate room contains another Save Album. The final room contains Sunnyside and beating it opens the exit.

The group can go back into Yoob's Belly anytime in the game by going up the mountaintop, though once they get inside, they will have to exit through the passage in order to get back on Yoshi's Island.