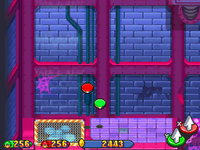 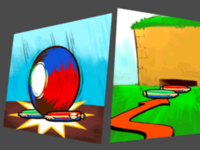 Baby Cakes is a Bros. Move in Mario & Luigi: Partners in Time. In the move, the adults, in Bros. Ball form, roll over the babies, flattening them into disk-shapes. In this temporary state, the babies can ride air currents and fit into very thin passages. It wears off after a certain amount of time, but going into a passage with a small roof that they can only fit under when flat or entering an air current will stop them from getting bigger. On the other hand, touching several objects like spikes and 4-Person Panels results in the babies wear off the state immediately. Baby Mario cannot use his hammer in this form, and Baby Luigi cannot use the Baby Drill when in this form. The adult Bros. cannot give them a piggyback or do a Baby Spin until the babies are normal size.

The move is taught by Toadsworth the Younger after he and Toadsworth teach the Baby Spin move after Mario, Luigi and the babies clear the Gritzy Caves and before they head for Thwomp Volcano. After the Toadsworths use the move on Baby Peach, she becomes flattened and then blown by a wind to a cave in the castle. Toadsworth the Younger then asks Mario, Luigi and the babies to rescue her, which serves as an opportunity to practice the two moves the player has just learned.