DEF-Up is a positive status condition that has appeared in several Mario RPGs. It stands for "Defense-Up".

Green Peppers appear again in Mario & Luigi: Partners in Time, although they both affect all fighters that are currently active, and no longer causes Light G. DEF-Up is indicated by an expanding green circle around the attacker. 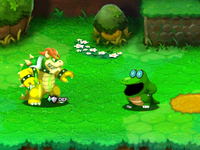 DEF-Up makes another appearance in Mario & Luigi: Bowser's Inside Story and its 3DS remake, Mario & Luigi: Bowser's Inside Story + Bowser Jr.'s Journey. Green streaks flowing upward indicate the affected, and in the remake, the affected turning a green color. Def Peps can give this status effect to other enemies. Bowser can gain this status by inhaling a Toothy's body segments and a Crawful's teeth.

DEF-Up reappears in Mario & Luigi: Dream Team. Green streaks flowing upward and green flashing indicate the affected. By using a Bronze-Guard Badge combo, Mario and Luigi can increase their defense. During Kamek's third battle, his green copy can raise the defense of the real Kamek and the other copies.

In Paper Mario: The Thousand-Year Door, several items and the Crystal Star power called Power Lift can raise defense. The DEF-Up status is indicated by a gray diamond with an arrow pointing up above Mario or his partner. Enemies can also receive this status effect.