Marilyn is one of the three Shadow Sirens and the middle sister of the older Beldam and the younger Vivian (who is later replaced by Doopliss). She and her sisters work alongside the X-Nauts to find the seven Crystal Stars and open the Thousand-Year Door. Marilyn and her teammates appear several times throughout Mario's adventure in Paper Mario: The Thousand-Year Door, making numerous attempts to slow him and his partners down and hinder their progress.

Many years prior to the events of the game, Marilyn and her sisters served the Shadow Queen, an evil demon that once threw the world into the depths of terror and sank the entire town of Rogueport underground. After her defeat and subsequent sealing by the four heroes, the Shadow Sirens started devising a plan to gather the Crystal Stars and break the seal on the Thousand-Year Door, so that they could serve their queen once more. 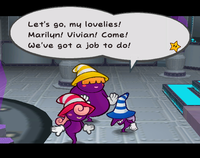 Beldam, Marilyn, and Vivian prepare to go to Boggly Woods.

During their search, Marilyn and her teammates eventually come across the X-Nauts. They soon become acquainted with its leader, Sir Grodus; they then join him and are enlisted in his services, pretending to be nothing more than hired help. Knowing how desperate Grodus is to rule the world, the Shadow Sirens lie to him, saying that the Shadow Queen would obey his every command if released. They also tell Grodus about the seven Crystal Stars, which are required to break the Thousand-Year Door's seal, and the Magical Map, contained inside of a treasure chest that can be opened by one who's pure of heart. Neither Grodus nor the Shadow Sirens could open the chest themselves because of their evil and tainted ambitions, so they decide to get someone else to open it for them. That "someone else" happens to be Princess Peach. 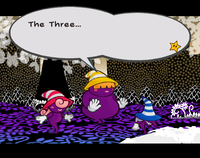 Marilyn speaking her only two words as she and her sisters introduce themselves in Boggly Woods.

After Beldam's failed attempt to abduct Princess Peach and steal the map from her after the chest is opened (there are too many witnesses), she flees to the base. Sometime later, after Mario and his partners defeat Hooktail and obtain the Diamond Star, an X-Naut soldier informs Grodus of this, and sends the Shadow Sirens on a mission to ambush Mario at Boggly Woods and steal the map from him, giving them of a sketch of Mario so that they know what he looks like. Unfortunately, Beldam somehow manages to lose that sketch, and as a result, none of the Shadow Sirens besides Marilyn recognize Mario when they come across him. However, as she tries to alert her sisters, Beldam cannot understand a word she is saying and so ignores her in favor of yelling at Vivian. Eventually, the Shadow Sirens find the sketch, and recognize Mario as soon as he and his partners return to retrieve Flurrie's necklace, which Vivian had stolen. The Shadow Sirens (including Marilyn, making this the only time she speaks in the game) introduce themselves to Mario and company, revealing their intention to steal the magical map from the heroes and obtain the rest of the Crystal Stars. Shortly afterward, the Shadow Sirens engage Mario and his partners in combat and are eventually defeated. Beldam then blames their defeat on both Marilyn and Vivian, telling them to "prepare for a world-class punishment session when [they] get home". After that, the Shadow Sirens flee to the X-Naut fortress, leaving the necklace behind in the process. 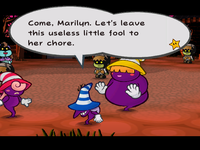 Beldam and Marilyn leaving Vivian to search for the Superbombomb before taking a nap.

Later on, up at the X-Naut Fortress, Grodus ridicules the Shadow Sirens for their failure to steal the map from Mario, but Beldam then tells him about the Superbombomb, a weapon she prepared that would bring Mario to a "quick and certain end". Although Grodus is displeased with their previous failures and is beginning to lose his patience, he trusts Beldam's word, sending the Shadow Sirens to Twilight Town, Mario and company's next destination. Before they can use the Superbombomb, however, Beldam loses it just as she lost the sketch, and once again blames Vivian for it. After that, Vivian is left to search for it while Beldam and Marilyn go to take a "well-earned siesta". After they finish their nap, Marilyn and Beldam find that Vivian is no longer there, having been recruited into Mario's party. After that, Doopliss, just defeated by Mario and Vivian, comes rushing by and is recruited into the Shadow Sirens as Vivian's replacement.

Marilyn is not seen again until Chapter 6, when Mario and his partners arrive at Poshley Heights. She, along with Beldam and Doopliss, are seen at Poshley Sanctum stealing what they think is the Garnet Star. After stealing it, the Shadow Sirens flee from the scene. Mario and his partners are about to chase them but are told by Pennington, the Sanctum Manager, that the stolen "Crystal Star" is a fake, and that the real one is cleverly hidden somewhere within the Sanctum.

Beldam, Marilyn, and Doopliss witnessing Mario and Vivian's battle against the Shadow Queen.

Eventually, Beldam and Marilyn change their evil ways and make amends with their sister. Beldam apologizes to Vivian, promising to never mistreat her again, and they are last seen living peacefully in Twilight Town.

Although Marilyn does not appear in Super Paper Mario, she and Beldam are still mentioned in Vivian's Catch Card description. 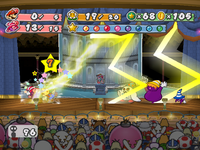 Marilyn using her lightning magic on Mario and Vivian.

Marilyn, unlike her teammates, happens to be very quiet, and is never or rarely ever seen talking. She's often described as the "strong, silent type" by Goombella. The only words she speaks are, "The Three..." while she and her sisters are introducing themselves to Mario and company. Otherwise, she makes "Guh" sounds and variations of it. Despite this, Beldam usually understands what she's saying, or at least what she's trying to say. Marilyn is shown to be very loyal to Beldam, as she often follows whatever orders are given to her without question. Because of that, Marilyn is the "favorite" of the group, as Beldam treats Vivian and Doopliss with as little respect as possible.

Marilyn specializes in powerful lightning magic abilities, as reflected by the yellow stripes on her hat. She also has the ability to charge her attack power by two various times, and if the player does not stop her, then she can double or triple her already-high attack power, potentially causing an instant death. As with her sisters, Marilyn knows how to use the Veil ability, allowing her to sink into the shadows. She uses this ability to hide and teleport, but she does not use it in battle.