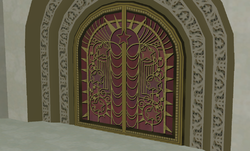 An angle view of the Thousand-Year Door

The Thousand-Year Door is a massive door in Paper Mario: The Thousand-Year Door that is said to have a treasure behind it. Generations of locals have created myths about what's behind it, and nobody knew that it turned out to be the entrance of the Palace of Shadow. The only person that knows Rogueport's true history is Grifty. 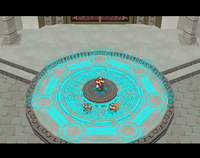 The pedestal in front of the Thousand-Year Door

The Thousand-Year Door, like the Crystal Stars and the Palace of Shadow it leads to, was created to hold back a horrifying demon that had destroyed the town that once stood within Rogueport's boundaries. The four heroes' designing made it so that the Crystal Stars were required to open this door, although their seal on the door would only last for a thousand years and was therefore continually weakening before the events of Paper Mario: The Thousand-Year Door. When Mario placed all seven Crystal Stars before the door, the dark power caused the door and walls around it to crack. A vortex spewed out, and for the first time in a millennium, the Shadow Queen's stolen home was open. During the events of Paper Mario: The Thousand-Year Door, the so-called "treasure" that had been spread in rumors is revealed as Shadow Queen herself, but the ending shows a Dried Shroom. Its discoverer, Professor Frankly, is still happy with his finding, because it is proof that civilizations ate mushrooms 1000 years ago.

Because of the legends surrounding it, very few people have even dared to touch the door.

During the fight with the Shadow Queen, the pedestal in front of the Door is shown to be directly underneath the center of Rogueport (the gallows). During the long cutscene halfway through the battle, the player sees, around the gallows, the pedestal's lights, as well as each of the Crystal Stars.