“Ah! Behold the elegant curve of her prow! She cuts to the very SOUL! Don't you agree?”
—Flavio, Paper Mario: The Thousand-Year Door 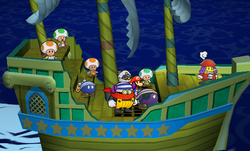 The crew of the S.S. Flavion 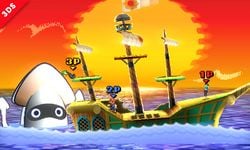 The S.S. Flavion is a ship that Flavio owns. It is Flavio's favorite ship of the many ships he owns, and is used to sail to Keelhaul Key at first in Paper Mario: The Thousand-Year Door. However, the S.S. Flavion was sunken during the 'OO' day of the star month by ferocious pirate-ghost Embers, and the crew was washed up on the island of Keelhaul Key, many of them separated. They later made a small settlement on the island's shore.

Afterward, the ship used to get to and from Keelhaul Key is Cortez's haunted ship.

Despite the prefix "S.S." which usually indicates a steamship, the S.S. Flavion is a sailing vessel.

Mario is its captain, and its navigator is Admiral Bobbery. Flavio, of course, is its owner and namer, and Pa-Patch is its crow's nest worker; Pa-Patch is also in charge of keeping the ship afloat, so says Flavio during their expedition. There is also Four-Eyes, who is Lord Crump in disguise as a sailor. Several Bob-omb sailors and Toads make their way out to sea aboard the S.S. Flavion as well, such as the Toad sailor and Thriff T.