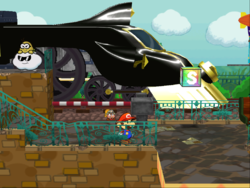 The Excess Express is a luxurious train which is boarded by Mario and his partners, to get to Riverside Station and Poshley Heights in the game Paper Mario: The Thousand-Year Door. It, as well as the smaller areas Poshley Heights and Riverside Station, serves as the setting of Chapter 6 of that game. The Excess Express is made up of a locomotive, three passenger cars, a dining car and a baggage car. This chapter has no combat until the boss at the end.

The Excess Express seems to be based on the Orient Express from the English detective novel Murder on the Orient Express. Similar to the story in the book, Chapter 6 of The Thousand-Year Door involves a crime being committed on a train and several of the passengers being suspects. Both casts of characters include a detective (Pennington, who references Hercule Poirot) and a celebrity (Zip Toad, who loosely references Linda Arden from the novel). 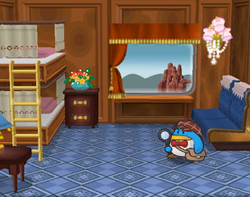 Pennington inside a passenger car 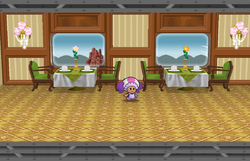 After returning to Rogueport from Keelhaul Key, the Magical Map leads Mario and his partners to the Poshley Sanctum in Poshley Heights, where the Garnet Star is located. Like Glitzville, Mario needs a ticket to get to the Excess Express, which Professor Frankly says is the only way. After doing Don Pianta's workers (Tony and Vinny) a favor (finding Don's daughter and her boyfriend), Don gives Mario an Excess Express Ticket. While on the way to the station, Beldam appears and thanks Team Mario for saying that the next Star is in Poshley Heights. Knowing they must reach the Star before the Shadow Sirens do, Team Mario heads for the station. 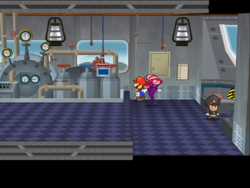 During the three-day train ride, many unfortunate events happen, forging the premise of a whodunit novel or film and hindering Mario and his pals by keeping them from getting the sixth Crystal Star. Heff T. steals Chef Shimi's Galley Pot, and Doopliss (impersonating Zip Toad) steals a businessman's briefcase containing ingredients for Nitro Honey Syrup, the waitress's Shell Earrings, and Toodles's Gold Ring. Under orders of the Shadow Sirens, he planned to mix the things he stole together to bomb the train, resulting in what he described as a "sticky, yummy explosion" in the threatening message he left in Mario's cabin. Mario and his friends enlisted the help of Pennington to foil his diabolical plans, and in doing so, returned the stolen items to their rightful owners.

Mario also meets Ghost T. here. Mario has to talk to him after the Excess Express conductor accidentally left Ghost T. a blanket (not realizing that he was a ghost), leaving himself without a blanket of his own. Mario has to retrieve Ghost T.'s diary for the ghost to get him to give the blanket back. If Mario opens the diary, he will be warned three times not to read it. If he says "yes" on all three warnings, he will be only allowed to read the first three lines before Ghost T. appears, giving Mario an instant Game Over.

Mario and his team also encounter a massive horde of miniature Smorgs while the train is being refueled at Riverside Station. After the Shadow Sirens' sticky bomb plan was foiled, they ordered the horde to guard the drawbridge switch to keep said bridge lifted and prevent the train from progressing any further. After Team Mario venture inside the station, they fend off the horde and lower the drawbridge, allowing the train to continue on its jorney, but little do they know, as the train left the station, the horde stowed away in the baggage car. The next morning, the horde attacks the train and kidnaps all the passengers onboard, with the exception of Ghost T. (who does not notice the Smorgs), the engineer, the shopkeeper, the conductor and the waitress, the latter two of which they hold captive in the baggage car. Team Mario fends off the Smorgs in the baggage car and climb up to the heavily Smorg-infested rooftops of the train, where they fight the horde; this is the only time the train's rooftops can be accessed. Eventually, Team Mario defeats the Smorgs, freeing the passengers and saving the Excess Express, which soon arrives in Poshley Heights.

After Team Mario acquires the Garnet Star (which was hidden in a secret area of the Poshley Sanctum), they ride the train back to Rogueport. With the train ticket permanently in his inventory, Mario and his partners can board the Excess Express anytime after Chapter 6 to travel from Rogueport to Poshley Heights, and vice versa. However, Mario can no longer access the baggage car. Later in the game, Mario receives several e-mails from characters on the train, including the real Zip Toad and Ghost T.

Below is a list of the occupants of the eight cabins of the Excess Express. With the exception of Mario, Ghost T., and Heff T., all occupants are replaced by various traveling Toads, Koopas, and Goombas after Chapter 6, listed after the forward slash.

Other characters found on the train include the engineer, the waitress, Chef Shimi the cook, the conductor, as well as a red Toad who runs the shop. After Chapter 6, a single Yoshi can also randomly appear in the kitchen cabin, the only one in the game other than Mario's Yoshi partner and his Stampede friends.

Additional items are on sale at the Sales Stall item shop in the dining room.