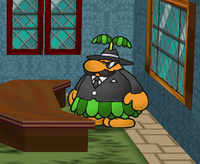 Don Pianta, also known as the Don of Untimely Death, is the boss of the Pianta syndicate as well as ruler of the west side of Rogueport. Don is the father of Francesca and the rival of Ishnail. His skin is orange, he has a mustache, and he wears a dark suit, dark sunglasses, and a gangster-style fedora in addition to the traditional Pianta grass skirt. Like all stereotypical gangsters, Don Pianta speaks with a Brooklyn accent. This trait is shared with Rocko and Ishnail.

Mario must visit him in order to acquire tickets to the Cheep Blimp, in order to reach his destination, Glitzville. Don Pianta agrees to supply Mario with the tickets needed under one condition, that he find his missing daughter and his most trusted henchman Frankie, who have eloped. After Mario locates them at the docks, Frankie and Francesca confront the mob boss. Through Mario's intervention, Don Pianta gives the couple his approval, and rewards Mario and co. with the tickets he promised.

He soon falls ill however; he misses his daughter so much, he becomes sick with grief. He is revisited by Mario who is, once again, looking to gain a ticket, this time for the Excess Express in order to reach Poshley Heights. Vinny and Tony promise Mario tickets, if he can find and return Francesca. Mario travels to Keelhaul Key, and after notifying Francesca of her father's condition, she returns with Frankie in tow. Upon the arrival of his daughter, Don Pianta instantly recovers and comes to the realization that his job as boss of the Pianta syndicate is too stressful and passes the leadership on to his daughter and son-in-law, and retires. He then awards Mario with tickets to the Excess Express. Afterwards, he remains in the Pianta Parlor for the rest of the game.