“MAAAACHO! I'm a powerhouse now, you pesterin', li'l pieces of prairie piffle! So long's I have this here machine, my bod'll be rough, tough, an' ultrabuff!”
—Macho Grubba, Paper Mario: The Thousand-Year Door

Macho Grubba is the powered-up form of Grubba, the true chapter boss of the Glitz Pit in Paper Mario: The Thousand-Year Door, and the keeper of the real Gold Star. In this state, he has sixty HP and a very wide variety of attacks. After being defeated, Grubba's power-sucking machine goes off, returning energy to Bandy Andy and KP Pete, freeing Prince Mush, and reverting Grubba back to his normal form. He is also one of three chapter bosses not affiliated with either Sir Grodus or the Shadow Queen throughout the entire game (the others being Cortez and Smorg). He is also one of four chapter bosses the Yoshi Kid can swallow, the others being Doopliss, Grodus and the Shadow Queen (first phase, before and after transformation). 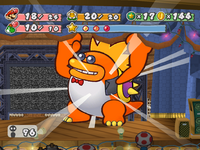 Macho Grubba powering himself up