Bumpties[1] are a race of penguin-like creatures that first appeared in Super Mario World 2: Yoshi's Island. They are usually found in icy regions, and are generally seen either patrolling or jumping around on the ground, although they can also be seen flying, despite being inspired by penguins. Bumpties have pear- or egg-shaped bodies. Most Bumpties are blue—however, pink and green individuals were shown in Paper Mario. Their name is a corruption of "bumpy", referring to their bouncy, rubbery feathers.

Bumpties are usually found wandering around in icy areas of Yoshi's Island in their debut game, Super Mario World 2: Yoshi's Island. While Yoshi can grab Bumpties with his tongue, he cannot eat them. Also, if he runs into one, he is bumped backwards, hence the name. This means that Bumpties cannot hurt Yoshi. Their official artwork depicts them as a more purple shade of indigo.

They can also steal Baby Mario if Baby Mario has already been knocked off Yoshi and is floating towards one, like a Bandit.[2][3]

A certain Bumpty appears only in the SNES version of Tetris Attack, allied with Dr. Freezegood in the "Ice World". It replaces the ice fairy, Sharbet, from Panel de Pon. Here, it is depicted as Yoshi's friend, but enchanted by Bowser and Kamek to work for them. Yoshi and Bumpty become friends again after freeing it and Dr. Freezegood from the spell. It also notes in the game that others say that it is cute, but it really does not like it, and would like to be considered cool.

Bumpties reappear in Stage 3-4: Frustration in Yoshi's Story. They still repel Yoshi if run into, but they can be eaten.

They also appear in Yoshi's Island DS in Baby Bowser's levels. Here, they can be defeated simply by blasting them with one of Baby Bowser's fireballs.

In Yoshi's New Island, Bumpties appear in Brave the Bumpty Blizzard and Fire Watermelon Wonderland. They are colored purple, similar to their original artwork, instead of blue. Unlike previously, they will not steal Baby Mario if he has been knocked off Yoshi's back.

A Bumpty in Yoshi's Woolly World

In Yoshi's Woolly World and Poochy & Yoshi's Woolly World, Bumpties can be eaten, but not converted into a yarn ball, instead being spat out. They will bounce Yoshi away if they hit him. They can also be used to hit other enemies and Winged Clouds. They appear only in the levels Big Montgomery's Ice Fort, Snowy Mountain Lift Tour and Wonderful World of Wool.

Bumpties reappear in Yoshi's Crafted World, notably being summoned by Burt the Ball in the boss fight against him in Burt's Bouncy Battle. They also appear as basic enemies in Chilly-Hot Isles. Some use buckets as armor to push Yoshi into the water. Yoshi can hit them with eggs to obtain Red Coins.

A penguin from Paper Mario

Bumpties, referred to simply as penguins, return in Paper Mario. In this game all the penguins are allies, not enemies. At the beginning of the game, a small group of penguins (including Mayor Penguin) attend a party at Peach's Castle prior to the arrival of Bowser. Later, Mario travels to a city of penguins called Shiver City. He also meets a famous penguin named Herringway who is a writer. One of the penguins in Shiver City participated at a Dojo in Toad Town, having fought his way to a Third-Degree Card.

A penguin in Paper Mario: The Thousand-Year Door

Penguins also make a small appearance in Paper Mario: The Thousand-Year Door where they live in Poshley Heights, a town of the rich and famous. Mario also meets an incompetent detective penguin named Pennington. The penguins living in Poshley Heights typically say 'eh' in between sentences, an exclamation stereotypically associated with Canadian English. 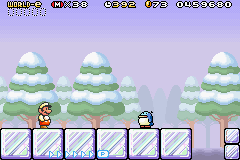 Bumpties also appear in Super Mario Advance 4: Super Mario Bros. 3, only appearing in the World-e level Slip Slidin' Away. The sprites are the same as in Super Mario World 2: Yoshi's Island, but with a slightly different palette. Players cannot harm them unless they use a Fire Flower or Hammer Suit. If players try stomping on it, they are bounced off, and if they touch it from the side, players will not be harmed, but they will be knocked off to the side.

Hello everybody, I am Bumpty.


The Ice World is my home. Brrrr! People think I'm cute, but I hate that. Instead, you should just think of me as being cool. 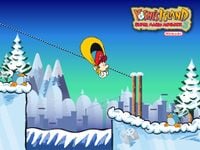 Pictures of Raphael the Raven edited to somewhat resemble Bumpties