Not to be confused with Flurrie.

Flurries[1] (singular Flurry; occasionally pluralized Flurrys[2]) are snowman-like creatures that appear in the icy regions of World 4 of Subcon. They first appeared in Super Mario Bros. 2 as enemies and soldiers of the 8 bits. They are named after flurries, which are brief periods of snowfall. They are the first snowman species in the Mario franchise.

In Super Mario Bros. 2, Flurries are enemies that run along the ice chasing after Mario, Luigi, Peach, or Toad. Like them, they have poor traction on the ice and can slip off of the platform they're on. They only appear in World 4. In the rare instances that they can be led onto non-icy surfaces, such as the bottom of the second tower in World 4-3, they have perfect traction. In the NES version of Super Mario Bros. 2, Flurries are white (left image), while in the SNES version and other subsequent remakes, they are pink and have blue feet (middle and right images).

In the direct sequel of Super Mario Bros. 2, BS Super Mario USA, Flurries make their return and play the same role as in the predecessor. They only appear in the third broadcast, which is also Subcon's icy area.

Flurries make an appearance in Super Mario Advance 4: Super Mario Bros. 3. They only appear in the World-e level Treacherous Halls. There are two of them, one of which can help Mario or Luigi pass through the spiky path via standing on their heads, and get a 1-Up Mushroom and/or an Advance Coin. These Flurries have poor traction no matter what surface they are on.

“It's them! Princess Toadstool and those two faucet freaks. C'mon, Flaky. Let's tell King Koopa so we can put 'em on ice for good.”
—Flurry, "The Bird! The Bird!" 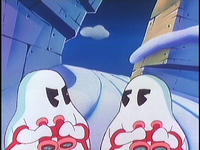 Some Flurries occasionally appeared in The Super Mario Bros. Super Show!, where they spoke, despite not having visible mouths. Due to Wart not appearing on the show, they work for King Koopa here, and one (Flaky) even had a name. Staying true to the spirit of the games, Flurries appeared only in episodes that are set in snowy environments: the Land of Ice in "The Bird! The Bird!", the North Pole from "Koopa Klaus", and the Thirteen Mushroom Colonies in "The Koopas are Coming! The Koopas are Coming!" Unlike in the game, some of them have arms.

A Flurry, alongside a Shy Guy and Snifit, attends Bowser's wedding to Princess Peach in the Super Mario Adventures comic.

Nakabon
Tribe: Beast clan
Disposition: Ice cold
Game appearances: USA
A cute snowman
The snowman appears in the icy world of Mario USA. He just runs into you at high speed, but the icy surface is slippery underneath, so it's quite a challenge. His American name is Flurry.

Bio: 雪のモンスター。水の上を滑りながら、マリオを追いかけてくる。[6] (Snow monster. Sliding on the ice, it chases after Mario.)