Not to be confused with Goomba or Gloomba.

Galoombas (named Goombas[1] before Super Mario 3D World) are enemies that first appear in Super Mario World. They either walk across the ground, parachute from above or float down in bubbles (which burst upon coming into contact with any object), or can even appear with wings to hop around. In Super Mario 3D World, they are given the name Galoomba to distinguish them from actual Goombas.

This variation of Goomba debuts in Super Mario World, first appearing in Donut Plains 4. Although these creatures walk in straight paths to attack like regular Goombas, they do not resemble the original ones. These Goombas do not have mushroom-shaped heads but rather more spherical ones. They also lack a stem; the Goomba's two feet are attached directly to the bottom of the head. As such, they resemble chestnuts more than mushrooms. Here, they have yellow feet.

They cannot be defeated in a single jump, as doing so flips them over and immobilizes them. In this state, they can be picked up and thrown at other enemies, like with Koopa Troopas. Running into them or jumping on them when flipped causes them to be kicked around (though they do not ricochet, like shells do). After a few seconds they right themselves, which damages Mario if he is carrying one. They can automatically be defeated with a Spin Jump, with a fireball or an attack from Yoshi; an attack with the cape causes them to be flipped over as well.

There are two variants of Goombas in the original Super Mario World. Para-Goombas are Goombas which utilize parachutes instead of being Goombas with wings, though Flying Goombas, which are wing-bearing Goombas, also appear, and can only hop on the ground instead of fly. Like Paragoombas, Flying Goombas' wings are clipped after one stomp, reverting them to normal Goombas, and thus, stomping on them after their wings are gone just renders them helpless for a few moments, allowing the player to throw them at other enemies. Spiked versions of Flying Goombas also known as Para-Goombas later appeared in Mario Clash.

In the Game Boy Advance remake, Super Mario World: Super Mario Advance 2, after the player beats the Special Zone and finds all of the exits, the Goombas are recolored yellow and wear sunglasses.

After a long absence, Galoombas reappear in Super Mario 3D World and its Nintendo Switch port under their current name, alongside regular Goombas and a bigger variation named Big Galoomba. Like normal Goombas in 3D Mario games, they attempt to chase after the player upon seeing them. Additionally, like in Super Mario World, Galoombas cannot be defeated with one jump, as that causes them to be flipped over, though unlike in Super Mario World, a second jump defeats them. A Ground Pound can also be used to defeat them in one hit. Additionally, Galoombas cannot be carried, kicked around, or thrown, as running into them while immobilized also causes them to be defeated.

Galoombas replace regular Goombas when in the Super Mario World style in Super Mario Maker and Super Mario Maker for Nintendo 3DS. They use a slightly edited version of their original sprite from Super Mario World; their feet are colored green instead of yellow to match their artwork and modern appearances. When stomped on, they turn upside down, waiting for the player to pick their bodies up and hurl them. If a Super Mushroom is dragged onto a Galoomba, the enemy will transform into a Big Galoomba; if wings are given to a Galoomba, it will become a Paragaloomba.

Galoombas reappear in Super Mario Maker 2. In addition to retaining their previous properties, by tapping and holding Galoombas in Course Maker, they can be changed into a Goombrat-like enemy called Goombud. Although Galoombas coexisted with Goombas in Super Mario 3D World, which has its own style in this game, they remain exclusive to the Super Mario World style. 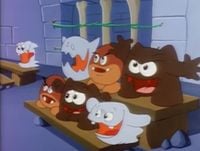 Goombas with Boo Buddies and Ninjis in "The Yoshi Shuffle".

These Goombas appear twice in the Super Mario World cartoon. They first appear in "The Wheel Thing", in which they are shown as being the "power source" for the cars made by Mario and Luigi. They also briefly appear in "The Yoshi Shuffle" in the audience during the football game.

In Super Mario Adventures, these Goombas and at least two Flying Goombas were sent by Bowser to attack Princess Toadstool's Palace. In addition, they were among the attendees to Bowser's marriage to the hypnotized Princess Toadstool.

Paragaloombas appear as an obstacle during the minigame Ridiculous Relay. The single player must dodge both them and Banzai Bills in their hand glider, and reach the finish line before the other three players do.

In Mario Party Advance, due to appearing alongside standard Goombas, this version of Goomba is relocalized in English as "Goombob," a character who lives at Goombob Manor. Another member of the species that appears is his crush, Goombetty. Red and blue versions of this type of Goomba also appear in Tap-Tap Sumo.

Galoombas appear in Mario Party 10, in a few minigames that also feature Goombas and Goombrats.

Galoombas appear in the Mario Party: Star Rush minigame Goomba Guess. The goal of the minigame is to tap the most Goombas, while Galoombas deduct one point from the player. In the beginning of the minigame, the placement of the enemies are shown before they shift positions, and afterward are covered by a dark veil so players are required to memorize the placements beforehand.

Galoombas appear in Super Mario Party as non-playable characters. They can be seen in the minigames Nut Cases and Take a Stab.

A Galoomba in its encyclopedia entry from Mario Party Superstars

Three Galoombas appear in Mario Party Superstars in the background of Woody Woods, replacing the Wigglers from the Mario Party 3 version. Two of them are talking to each other, while the other can be seen juggling an apple. In their encyclopedia entry, it is mentioned that they are often confused with Goombas.

In Shogun Studios, a group of Galoombas ambush Mario from one of the sand patches in a house.

In battle, Galoombas attack Mario with a Headbalonk move. If they have HP remaining after jumping on them, they will flip over like in the mainstream Super Mario series.

Galoombas appear in Dr. Mario World as assistants. In stage mode, they grant a chance that two objects, mainly viruses, transform into pop cannons at the start of a stage. In versus mode, their effect is to transform two of the viruses that appear after all viruses are eliminated into pop cannons. In both cases, the chances that the effects occur are greater at higher levels. They also appear on the World 21 map after an area has been cleared of viruses. A Galoomba assistant is rewarded after clearing the first area in World 21.

Galoomba
Tribe: Mushroom clan
Disposition: Ill-tempered
Game appearances: World
A very stiff Goomba?
Galoomba is a relative of Goomba (p. 72), a traitor to the Mushroom Kingdom. Their bodies are hard, so even if they are stepped on, they only turn over and quickly recover. There are also Parachute Galoombas that parachute down from the sky.