This article is about the secret area in Super Mario World. For other uses, see Special World (disambiguation). 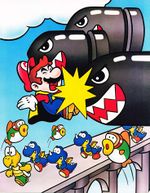 The Special Zone, also referred to as the Special World,[1] is the ninth and final area in Super Mario World that can only be accessed by a secret Star Road in Star World. The levels are located in various environments and are designed to be much more difficult to clear than all the other levels in the game. The names of the levels are also peculiar for Super Mario World stage names; they are all based on '80s slang (including Tubular, Mondo, and Way Cool). If Mario and Luigi clear all the levels, a new Star Road will appear and transport the plumbers back to Yoshi's Island, more specifically Yoshi's House.

The symbol at the top of the Special Zone is the Super Famicom logo. It is also the logo used for the PAL version of the SNES, which retained the original Japanese console and controller pad design and colors. In Super Mario Advance 2: Super Mario World, the logo is visible in the top left corner of the screen, but only after all levels in the Special Zone have been completed.

When playing Super Mario Advance 2: Super Mario World, completing the Special Zone will not transform the overworld, since that will only happen if the player finds the 96 exits.

A Message Block appears in the first stage of the Special Zone, stating that the player will receive a special present upon completing the Special Zone; upon doing so and returning to Yoshi's Island, the season will change from Spring to Fall (changing the color scheme of the environment), and several enemies will be completely transformed. In Super Mario Advance 2: Super Mario World, this message still appears. However, as the change only happens once all 96 exits in the game have been found, it instead refers to a different feature altogether: after the Special Zone has been completed, every time the player replays one of its levels, the bottom of the screen will display both the player's current and highest score in that level, as well as which character achieved the highest score. This feature does not appear outside the Special Zone.