It has been requested that this article be rewritten and expanded to include more information. Reason: include information about Flying ? Blocks in Dr. Mario World

“Where do these blocks come from, anyway? Life would be easier if they floated TO me instead of flying away...”
—Red, Dr. Mario World official social media accounts

Flying ? Blocks,[1] also known as Winged ? Blocks[2] and originally known as Flying Prize Blocks,[3] are ? Blocks with wings. They are one of the many blocks in the Mario franchise. These blocks fly around from left to right or up and down. They also appear in different colors. Some colors include red and yellow.

Flying Prize Blocks debut in Super Mario World. They appear in a few levels. They may fly back and forth or fly left constantly. They may give Mario a Fire Flower, coin, or 1-Up Mushroom. It is also possible for a Flying Prize Block to give Mario a Cape Feather, a behavior that goes unused; a feather spawned from this block moves to the left after popping out, instead of to the right like with other blocks containing Feathers.

Flying ? Blocks reappear in New Super Mario Bros. This time, red ones (also called Red Winged ? Blocks[4]) fly around the map to a level. If Mario selects any levels they are on, he can obtain a Fire Flower, 1-Up Mushroom, Mini Mushroom, Mega Mushroom, or a Blue Shell from the blocks. The yellow Flying ? Blocks also appear throughout levels, too. In World 7- 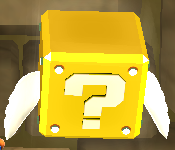 In Super Mario Galaxy 2, Flying ? Blocks make chirping noises similar to a real-world bird, and neither they nor their immobile counterparts can be Ground Pounded. Additionally, if Flying ? Blocks are hit, they will vanish right away, instead of turning into a normal Block.

They later return in Super Mario 3D Land, acting as they do in the 2D Super Mario games, and are found in several levels. This game also introduces Flying Coin Blocks, which do not lose their wings until they are emptied. In certain levels, it is required to ride on them to get a Star Medal.

They appear again in New Super Mario Bros. 2. Now, they can appear as regular ? Blocks, and get wings to fly when are hit. They will fly forward in the level a bit before stopping and rising up in the sky. In certain levels, riding these kinds of Blocks can lead to secret areas.

Flying ? Blocks also appear in New Super Mario Bros. U with the same functions as in previous games.

Flying ? Blocks reappear in Yoshi's Safari, and can be shot at with the Super Scope to drop items. They appear throughout courses or after defeating mini-bosses, and come in two colors: yellow and dark green. Yellow variants carry Coins, Super Mushrooms, 1-Up Mushrooms, Fire Flowers, Big Coins and even Super Stars. Dark green variants appear after defeating mini-bosses and drop items used for boss battles such as Clocks, Nuts, Super Mushrooms and Super Stars.

In Mario Party 9, a Flying ? Block appears in Growing Up. Inside of it is a cylinder which displays the buttons the players must press.

Flying ? Blocks make their only appearance in an RPG in Mario & Luigi: Dream Team. They appear in the background of several areas in the Dream World, and can be brought to the foreground by using the Sneeze Wind Luiginary Work, at which point they will become regular ? Blocks.