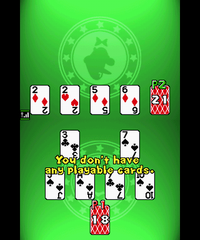 Speed is a Table minigame in New Super Mario Bros. As it requires two players, it is available only in the wireless Vs. Battle mode.

The rules are exactly the same as in the real-life card game of the same name. Players are dealt half the deck (26 cards) each. These cards are then divided into a "hand" of five cards and two replacement piles of six cards. The top card of each pile is drawn off and placed facedown in the middle of the play area to form the "speed cards." The remaining 15 cards are placed aside to replenish the player's hand.

Play begins by flipping over the speed cards and then each player's hand. Each player uses their stylus to play a card either one number above or one number below one of the speed cards. For example, a 4 or 6 can be played on a 5, and a king or a deuce can be played on an ace. When a card is played, another card is automatically drawn from the player's 15-card pile and placed into the player's hand. If none of the player's cards can be legally played, then they will be notified by the game and their play will stop for the moment. When the other player cannot play any cards, two new cards are drawn from the replacement piles. The winner is the first player to legally play all of their 15-card pile.

Place cards that are one point above or below the base card as fast as you can. Be the first to get rid of all your cards to win. You can place an ace on a king, and vice versa. Hurry up!