New Super Mario Bros. was designed as a successor to the Super Mario Advance series; Hiroyuki Kimura decided that an original 2D platformer for the conveniently soon-to-be-released Nintendo DS would take the place of a prospective "fifth" entry of the series.[1] The game began development in late 2003, and an early trailer was first unveiled at E3 2004.[2] 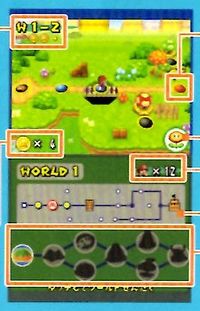 There was an underwater stage in VS. Mode which featured a Manta Ray. Spindrift was also implemented into the game, but was replaced by Spin Blocks in World 1-3 and other levels.

At one point, a Mario and Luigi race mode was planned.

The E3 2005 trailer showed some VS Mode levels that are not available in the final release, including a desert stage and an underwater stage. Some of the data for these levels remains in the game's files.

The game did not pause while Mario transformed after obtaining a power-up. There were originally three Stored Item spots rather than one.

The Mega Mushroom originally had a red-and-white appearance, similar to the Super Mushroom from Super Mario 64 DS. Mega Mario was also able to dash.

The desert music featured in certain kiosk demos that were playable in 2005 used an orchestra hit instead of the "bah" vocals, and the ground theme did not have the vocals.

It was possible to kick and punch as Super, Fire, and Mega Mario. Mario was also able to Somersault.

In a near-final build featured in screenshots shown in a certain page of a Monthly Nintendo News issue published in March, there were some very slight differences in areas such as level design. A screenshot at this stage suggests that World 3-B, a sky level, was intended to be a desert level at this point.[3][dead link]

In one version shown in a video showcasing World 1-1, the game is very similar to the final version, but the "bah" vocals in the ground theme are still orchestra hits.

A screenshot featuring early map icons exists on page 12 of the first version of the US manual.

Textures for the unused flat 3D 'world' models, annotated with the world theme as listed in the textures' names

There is also data to support a single-player snowball throwing minigame.

In the map directory, there are eight 3D models based on the eight world themes planned for the game. However, Worlds 4 and 6 do not display forest and mountain themes, respectively, as in the final game. World 4's texture is named "ancient" and shows an island with a volcano. World 6's texture is named "machine" and is a metallic graphic that may be a placeholder. This implies that these world themes were different in early builds.

There is an unused fauna-like image named "Junglekusa" hidden in the game. It is used by an unused actor (actor number 280, sprite number 255). The actor has a setting that can make the area it covers "swimmable", among other settings.