This game was originally announced for release on the Nintendo GameCube, and was at one point considered for release on both the GameCube and the Wii (as with The Legend of Zelda: Twilight Princess[1]). By summer of 2006, Super Paper Mario was a Wii exclusive.[2]

button rather than the different buttons they had on the final Wii version.[3] Most Pixls (initially named "Fairens") would be activated with the

Button,[1] and all Pixls but Tippi seemed to be one Pixl who would morph into others to use "Fairy Abilities" (such as Fairy Toss, Thoreau's predecessor, and Fairy Hammer, Cudge's predecessor).[4] It is unknown what button would activate Tippi in the GameCube version. The "action" icons when near an object or character looked more similar to the ones of the first two, but they were modified when the game was moved to the Wii. 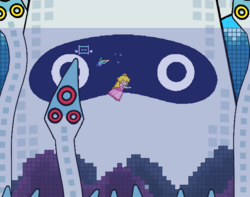 An early version of the game had a different, darker-looking version of the Whoa Zone from Chapter 4, with Mario still wearing a helmet, when he wasn't in the final product. Also, an early screenshot shows Mario under the effects of the Mega Star, but is colored very differently (giving his current colors rather than the initial ones seen in Super Mario Bros.). Oddly, he is shown in his proper colors in the official trailer that was released at the same time, which may imply that the screenshot's release was simply delayed.

In a screenshot featuring Big Blooper, there is a Pixl that is shaped like a ladder. It never actually appears in the final game. This Pixl would have been used to flip Mario to 3D, as revealed by unused Pixl data within the game's files that contains identical scripting to Mario's flip ability in the final game. Also, in the same screenshot, Tippi is present, but she was kidnapped by Francis at this point in the game, and by the time she is rescued, Big Blooper cannot be fought again. Finally, the scene depicting Bowser and Princess Peach's wedding at the beginning of the game was also slightly different in pre-release versions; there were no flowers decorating the columns, the rising of the Chaos Heart was surprisingly light, and Count Bleck raised his cloak up earlier than he did in the final version. Plus, in the screenshot, Peach is standing instead of having been knocked over, and Bowser looks normal rather than shocked.

The game's data include graphics for enemies that do not appear in the game and different designs for enemies featured in the final game.[6]

The game also contained unused data for Mario's partners from Paper Mario and Paper Mario: The Thousand-Year Door,[6] except for Sushie. All of the partners including Sushie make cameos as Catch Cards in the final version.

There are some unused animations, including a side view of Mario climbing a ladder, and Dimentio walking. Using a glitch, the player can activate Mario's normally unused ladder animation.[8]

There are a number of unused maps and rooms in the game. These include a room in the Whoa Zone featuring a chest containing Piccolo's card, an unused room in the final area of Castle Bleck, and a room in Floro Caverns with a Save Block and some enemies.[9] Some used maps have unused collision data and textures in the third dimension. If the player manages to spawn in one of these maps, they can be played normally. These include the Mario Bros.' House, Bowser's Castle and the chapel in which parts of the prologue and ending take place.[10]

For unknown reasons, the Korean version of Super Paper Mario contains 11 unused maps not found in the other versions, some of which include unique humanoid cat creatures that are part of the stage geometry and cannot be interacted with.[11] These do not fit the style of the rest of the game, though they somewhat resemble the style of the first Paper Mario.

global.txt contains an entry called anna_happy_coin, which describes an item called the Coin Flower. It is placed alongside other general in-level items such as the Happy Flower, Pal Pills, and Mega Star. Its tattle would have been "That's a Coin Flower. Grab them to pocket the coins they are carrying! Some of the flowers will have up to three coins on them..."

Artwork of a Gold Fuzzy.

Leftovers from Paper Mario: The Thousand-Year Door are present, with slight revisions. This includes enemy variations such as Green Fuzzy, Spinia, Spunia, Cleft, and Hyper Cleft. Notably, this also includes the Gold Fuzzy, which has reused artwork on the back cover of the official Nintendo Power guide and the Prima strategy guide. The Gold Fuzzy's filename was renamed from c_chorobon_k to e_chorobon_y, Spinia's filename was renamed from c_hannya_n to e_hannya_g, and Spunia's filename was renamed from c_hannya_t to e_hannya_p, suggesting that they were in the process of being retooled. Additionally, a Blooper Baby has graphics as a test enemy (TEST_s_gesso-), which appears incomplete as the texture features a solid black line at the bottom (possibly to test collision); the game's normal Blooper is also labeled as a test enemy (TEST_gesso-), so they were both likely used to test underwater gameplay.